Playoffs? A summer swoon makes it hard to find the points needed for Colorado

Will the Rapids make the playoffs? Pablo Mastroeni's team are at a low point, with a world-famous summer swoon in full effect.

Share All sharing options for: Playoffs? A summer swoon makes it hard to find the points needed for Colorado

Where to now Pablo? It was suggested a few weeks back that Pablo didn't keep tabs on the Rapids position in the standings. Whether this was tongue in cheek or serious is anyone's guess, but as a fan I care. For the record, we are tenuously holding on to the last playoff spot with 30 points. As losers of the last two matches and held scoreless something has to give, doesn't it?

This past weekend has to be the low point of the season. A loss at home to our Rocky Mountain Cup rivals in a fashion that for all intents and purposes was just embarrassing. The Rapids, with a man advantage for almost the entire second half, couldn't manage to score at least one goal to give them a chance to keep the Cup with the remaining game in Salt Lake in September. With 12 matches remaining, I think it is going to be challenging to find the 20 points necessary to make the playoffs. With their abysmal road record and seven remaining road matches (Dallas, DC, Seattle, LA, Salt Lake, Chivas, and Vancouver), I see maybe one certain win. The five remaining home matches are LA, Portland, San Jose, Seattle, and Dallas. I find nothing easy there either. I really want to be optimistic, but if the last two matches are any indication, Rapids are undergoing their annual summer swoon. Can they recover in time?

This weekend's rematch in Dallas is a good place to start. In their last visit to Dallas, the Rapids were a bit overanxious against their previous manager and lost 3-2. With Dallas currently sitting in 4th, a win this Saturday would certainly help stabilize a team currently reeling. The figure below shows how cruel the summer months can be for the Rapids. Over their history they have averaged almost 1.8 points per game at home throughout the season (versus just less than 1.0 point per game on the road). The frustrating part is even with the lineup shuffling that Pablo has done, to keep players fresh and accommodate the World Cup break, the Rapids still had a 3-3-3 summer break this year. 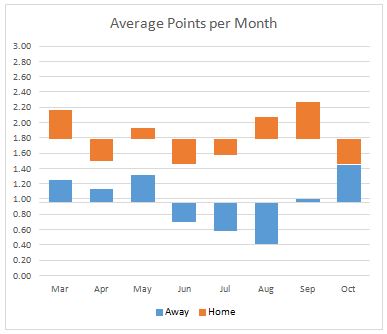 Even the Armchair Analyst (Matthew Doyle @MLSAnalyst) made a note this week that Pablo needs to start working the starting 11 into a more consistent roll, indicating the lack of familiarity, especially on the defensive end, was causing the current losing streak.  As far as the tactical part, I also noticed two things this past week most notably in the game on Saturday night.

The first was positioning. During the Salt Lake game, especially during the first half, Powers, for whatever reason, was slotted out on a wing rather than in his central midfielder role and LaBrocca was allowed to roam in the central field with Mari (so nice to see him back!) taking the center mid back.  In my opinion Powers was just lost and had very few meaningful touches.  Now whether this was due to Beckerman’s presence or just a test, I think Powers is much more valuable clogging up the middle and distributing versus being some sort of wide outlet.  Not sure why this late in the season Pablo is trying something new.

The second issue is the continued play of trying to send the ball over the top and let Brown’s speed catch the defense off guard.  IT DOESN’T WORK!  Salt Lake for almost the entire first half had two men defending Brown anytime he crossed the midfield.  While the talent is there, Brown’s first touch just isn’t good enough with two harassing defenders to even get a shot on goal.  I’d really like it if Rapids stuck Torres up top and then have them both release when Rapids decide to go over the top.  At least then teams would have to drop back a third defender or decide to cover each solo.  At that point I like our chances a whole lot better.  Brown is not a Buddle like bruiser who can contain and hold a ball allowing the rest of the offense to catch up.  Why the Rapids continue to press this type of advantage is beyond me.  I think partly the difficulties we have recently seen with the Rapids is that we have become too predictable and one dimensional on offense.  Rapids offense almost exclusively consists of sending it deep for Brown or sending Klute up the sideline and crossing.  To me there is very little else going on.  Sanchez is given free rein to use his creativity but even that has been shut down recently.  Throw in the Powers experiment and I think the team is lacking any real creativity in the final thirty.

Hard to believe only 12 games remain.  For a young team and new coach, the Rapids have looked good at times.  Last year they set the bar high when making the playoffs with such a young squad.  This year some growing pains exist but the talent is there to sneak in again.  Can Pablo find some magic? Wouldn’t it be fun to spoil FC Dallas' playoff hopes?