2014 is over for the Colorado Rapids, but there's always next year

Let's look at the roster and how it can be tweaked for the 2015 season following a run that essentially guarantees a lack of playoffs.

Share All sharing options for: 2014 is over for the Colorado Rapids, but there's always next year

If a graph says a thousand words then here you have it: 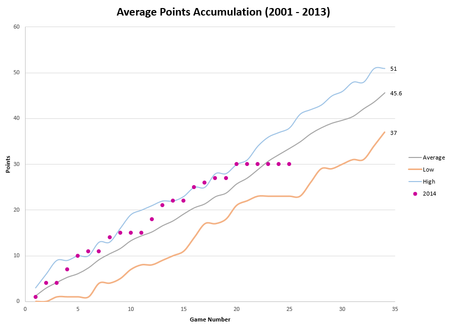 Gutted I think is the word I am looking for as a fan (note this was written before the LA game, which I won't even touch on until next week, because it will take that the long to get over the pain).  Personally I didn't have high hopes that the Rapids would travel to DC (record of 3 wins, 10 losses, and 5 ties all time) and steal three points.  I was hoping for perhaps some pride to step in and stop the suffering.  I was hoping to see some tactical changes to try and get the team out of their funk.  I was hoping the team started with a little urgency off the first whistle.

What I saw was a carbon copy of the last 5 matches.  An early mistake, leading to an early goal, leading to a wake up call, leading to an equalizer, and then falling behind again.  Stop me if you've read this one before.  And then tactically you put Brown up top, all alone?  Do you watch game film, do you think other teams watch your game film?  The league has figured you out Rapids, it is on you to make necessary adjustments.  The fact that you went into a must win game and trotted out the same tired old lineup just speaks volumes.

No more excuses.  If the season is a lost cause, which at this point, it appears the Rapids management thinks so (latest projections give Seattle, RSL, LA, and Dallas over 90% chance of making the playoffs thus leaving Vancouver, Rapids, and Portland to fight it out for the last spot) then let's build for 2015.

With Moor now out for the season with a torn ACL, the Rapids need to find what they have going into the 2015 season and with 10 games left here is what I suggest.

No Brainers:  O'Neill (D), Brown (F), Hairston (M), Irwin (GK), Klute (D), Powers (M), and Serna (M).  With an average age of 22 and with Irwin the old man at 25, I think this is a solid core.  At this point O'Neill probably should be shut down for the season and the remaining six should be on the pitch for every remaining game.  This then leaves three defenders, a midfielder, and a forward to try out for 2015.

My opinion is Mwanga and Watts can be jettisoned.  Mwanga is on his third team and hasn't broken through.  Watts has had minutes this year and while young the amount of mental errors suggests he just might not be a piece for the future especially with Hairston 2 years younger.  That leaves just eight.  Five defenders, one midfielder, and two forwards.

With the big seven at the core (Brown, Hairston, Powers, Serna, Klute, O'Neill, Irwin) Rapids need to find a forward, midfielder, and two defenders.  Torres should get every chance to play in the next 10 games.  If he can't make it, time to toss out the contract and give Eloundou the minutes next year.  Alvarez has shown something and I think he deserves a chance next year.  That leaves five defenders to battle it out.  Trial by fire.  If Rapids can build for next year why not let the young ones get battle tested now.  Irwin might get a bit mad by being shelled but with real field experience it can only help next year's team. And if these don't show growth well there is the off season (let's just forget that Portland gets our excellent first round pick next year...call it the Mwanga Curse!).