There's a bit of good and a bit of bad in the Rapids this season, and they seem to be unable to keep either of them consistent.

Share All sharing options for: Colorado Rapids suffering from Yin and Yang syndrome

A great Friday night at DSGP with the retirement of Pablo’s number, three points, and a rainbow!  Rapids returned to their dominant winning style, probably not seen since the Houston game back on June 1.  Also nice to put Chivas back in their place after they stole three points from us back on May 11.  Due to injuries, Pablo sent out a different lineup than fans were used to with Torres finally getting a start up top.  He didn’t disappoint and finally found the back of the net.  Two of the three goals scored this past week are up for MLS goal of the week honors, including LaBrocca’s fall away, off footed, blast to the top left corner (which in my biased opinion should win) along with Torres’ first goal.  All in all a great night.  Of course ESPN, during their half time broadcast during the Seattle/LA game forgot that soccer is played at a high level in Colorado and didn’t mention their 3-0 win against Chivas.  You know nothing really happened exciting in the match except for those two goal of the week nominees (read in sarcasm voice).  Thankfully Clint Freakin’ Irwin stood up and asked about the snub.  Thanks Clint and somewhere in the bowels of Rapids management someone should be dropping a line to ESPN and MLS and making a scene!

@AlexiLalas #AskAlexi For the third week in a row, no @ColoradoRapids highlights at halftime. Only game not mentioned. What gives?

By the way I loved the Monday Night Football (Soccer) concept.  And let’s be thankful Colorado wasn’t the featured team against their midweek opponent in New England.  The game that was played by the Rapids, in their 3-0 loss, has been an ongoing theme throughout this season and that was "consistently inconsistent."  As well as they played on Friday night, they played just as poorly on Wednesday night.  The differences between the two evenings can be summed up in two things:

1) Lineup Shuffling; and 2) Lapse in Defending

Stop me if you’ve heard this before?  The Rapids continue to believe (?) they have depth in their lineup.  Groupthink in the front office, run amok because the differences between the lineups was yin to the yang.  The lineup against New England was a glorified reserve squad.  Sure it had some nice pieces but putting a Yugo engine in a Ferrari isn’t going to wow anyone.  Perhaps Colorado thought going into New England, losers of their last 8, that they could sneak one by?  Although you’d think they would have learned by now that winning away from home is really difficult and doing it with half a team is next to impossible.  I think if Rapids are looking up at 5th place come October, games like this will be the reason why.

I understand the MLS season is a marathon, not a sprint, but by sitting Powers and trying to put Watts in as a substitute is asking for all kinds of trouble.  Watts had a nice game against Chivas playing behind Powers (see below, top left image).  The images are heat maps which show where a player saw action during the match (thanks to Squawka.com).  Below this image is Powers heat map against Chivas.  The two complemented one another nicely, by Watts solidifying the back, it allowed Powers to roam up top and support the scorers.  Then the abomination that was the New England game.  Watts’ heat map (below, top right image) shows him playing both sides of the coin.  Obviously having to drop back and assist on defense (see following image in the next paragraph) but still trying to go forward to assist in the attack.  Whatever the game plan was Watts couldn’t quite commit to playing up top or falling in behind.  My guess is the constant juggling of lineups just prevents young players from establishing a routine. 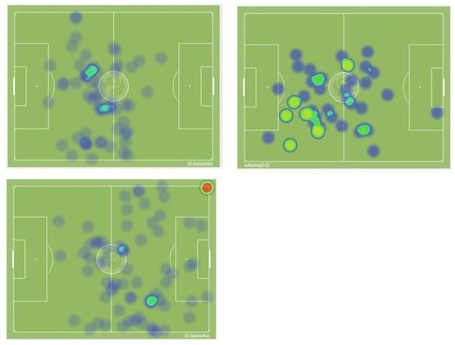 In addition to the lineup shuffling, defense lapses have been hard to hide.  Rapids lead the league in clean sheets with 9.  In those other 12 games, Rapids have given up 27 goals and 19 of those goals have been scored in 6 games (against KC, Seattle, Chivas, Dallas, Philly, and New England)!  To be so good in some games and tank in the following games is frustrating.  Let’s just look at the heat maps for the Chivas and New England matches:

Rapids own goal is to the left on both images, with the Chivas game on the left and the New England game on the right.  I’ve circled the most grievous area and have to ask "what the heck was going on at right back?"  Piermayr got punished hard against New England.  Injury reports being what they are where has O’Neill been?  Against Chivas we had Burch, Moor, Wynne and Klute.  For New England we had Klute (notice his runs on the right side against Chivas and left against New England), Moor, Wynne, and Piermayr.  In the six losses where three goals have been scored, only once did a team score these goals against the A-team configuration of Klute, Moor, O’Neill, and Wynne.  Piermayr was in three of those losses.

In the end, my guess is management looked to this weekend’s home matchup against Real Salt Lake as the key matchup.  I’m okay with that, but the intensity come Saturday night better be top notch, because otherwise with both LA and Portland finding their stride, the Rapids if they don’t start finding their form, will be forgotten (oh wait ESPN already did this). Rapids have 13 games to go at this point, on pace for 48 points, with two games each against Seattle, LA, and Real looming, the Rapids better find some consistency in lineup construction and defense.  They need some more Yin and less Yang...