Why The Labrocca-Watts Pairing Isn't Working, Or Why The Rapids Should Go After Jermaine Jones

There are few options for the Rapids at DM other than Nick Labrocca and Jared Watts, and the two aren't working particularly well together. Why not bring in a superior version of Labrocca in USMNT star Jermaine Jones?

Share All sharing options for: Why The Labrocca-Watts Pairing Isn't Working, Or Why The Rapids Should Go After Jermaine Jones

Defensive midfield is one of the hardest positions to play on the field. A good defensive midfielder can be the biggest game-changer for a team, more-so than almost any other spot on the field. Every great team can point to a great deep-lying guy in the midfield -- Real Salt Lake has Kyle Beckerman, Sporting Kansas City had Uri Rosell when they won the cup last year, and the 2010 Rapids were built around a Pablo Mastroeni-Jeff Larentowicz pairing that worked beautifully.

So when you have a team that has some turmoil at that position, ears should perk up a bit. Unfortunately, that appears to be a position that the Rapids have been caught in right now. Jose Mari has been injured for a month and Nathan Sturgis has been traded to Chivas USA, which leaves the Rapids down to the bare-bones when it comes to defensive midfield depth. (Four Palguta heads, alert!) The only real option, at least that doesn't involve moving someone like Marlon Hairston or Carlos Alvarez out of their natural attacking midfield positions, is a pairing of Nick Labrocca and Jared Watts.

Unfortunately, against the Columbus Crew, that pairing did not work out very well. Though the Rapids were superior in general in terms of possession, duels and a few other categories, it was the Crew that got all the chances, often based on quick counter-attacks caused by turnovers. Sometimes it isn't all about the numbers, and this was one of those games. The Rapids completed 399 passes, but nearly all of those were meaningless booting around the defense, 2012 style.

Let's compare the passing maps of Nick and Jared here: 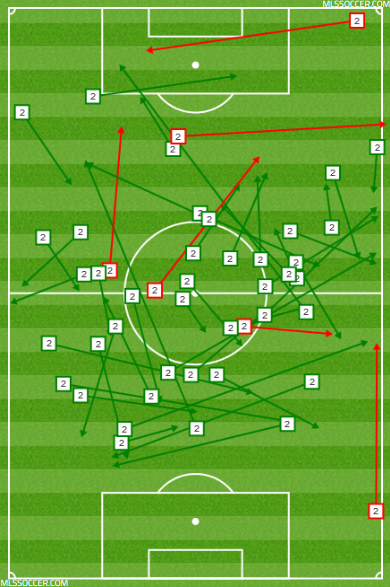 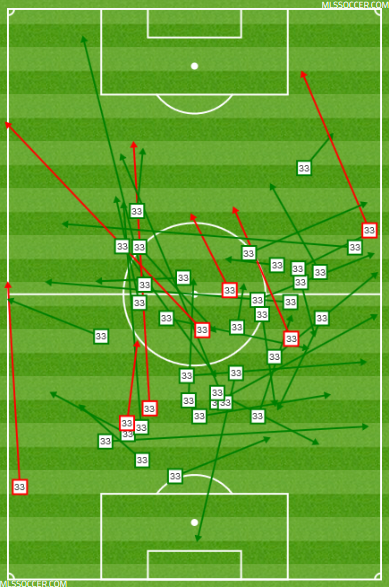 The first thing you'll notice is that, as I said above, Watts' distribution needs some work. He was brought in as a hard-tacklin' sort of defensive backstop in the midfield, and as such, rookie mistakes happen. The majority of the passes he completed were sideways or backwards, and every one of his missed passes was a ball going straight up through the midfield. When you start leaking those, you start giving up quick counter-attack chances. I'm not knocking Watts at all for this scenario, because it's a very tough spot for a rookie to get stuck into, especially against a team as good at swiping the ball away as the Crew are.

That's the reason why playing a lone defensive midfielder can be a risky proposition, especially if it's a youngster.  Hell, season veterans (Jeff Larentowicz in 2012, anyone?) can struggle mightily when put in that position. It takes a special player, a Beckerman, a Mastroeni, a Thomas, to do it effectively, and even then DMs tend to work better in pairs. As you can see from the passing charts, they hardly did work as a pair, and that's what made the pairing less effective. Watts was generally sitting back and passing it around sideways among the defense when he got the ball, because he's not a distributor type. Labrocca is more of a distributor type, and he spent the majority of the game sitting higher up on the field, ready to help with the offense. Unfortunately, the ball rarely got to him because Watts wasn't doing much distribution from his spot, and a large number of times when he tried to do so it turned into a Crew counter.

Labrocca was trying to play attacker, and Watts was suffering for it. Unfortunately, Labrocca just isn't good enough to justify trying to be quite so two-way, especially with a rookie behind him. He wasn't bringing the ball up much himself; rather, it was the fullbacks who did the vast majority of the work bringing it into the right half. So what to do when stuck in that situation? Pablo Mastroeni clearly wants two DMs on the field, and Nick Labrocca isn't nearly good enough to play the Jermaine Jones-type role that he seems to covet playing.

I'm sure you see where this is going.

I can think of a million good reasons to bring in Jermaine Jones that are just related to the marketing aspect of things -- we haven't had a USMNT regular since Mastroeni -- but the fact that he would immediately provide an upgrade at DM, where the Rapids clearly need the help, is probably the best reason I can think of. It's not just in the short term, where he can immediately cut down on the issues Watts has with distribution by carrying the ball out of the midfield himself when going into the attack instead of simply going off the ball.

After that, imagine him playing that same role, the one that he played on the US Men's National Team, with Jose Mari behind him as the clean-up guy instead of Watts. That's instantly one of the best midfield pairings in the league, and when you combine it with Dillon Powers and Dillon Serna, you get what might be the best midfield in the league.