Is goal-scoring more a matter of skill or luck?

Share All sharing options for: Is goal-scoring more a matter of skill or luck?

"Expectation is the mother of all frustration." – Antonio Banderas

With a 3-3 tie against the Philadelphia Union on Saturday night, the Rapids wrangled a point away from certain defeat.   Once again the Rapids were beneficiaries of a red card and PK.  The PK got the Rapids to within one and then playing against Union’s 10 men, the Rapids were able to equalize.  Well played.

As I mentioned before, the Rapids have struggled when one part of their game wasn't clicking.  Against Philadelphia, the defense struggled early, especially Shane O’Neill.  But this night, the Rapids kept up the forward pressure, tied the game 1-1 within minutes of being down one, got down again but continued taking chances.  The turning point was when the Union went up 3-1.  Most teams, on the road, have a huge uphill climb to gain any points at this moment.  Pablo, being Pablo, didn't settle but instead sent in more firepower with Alvarez, Hairston, and Torres.  Rapids kept pressing and they were rewarded.  Sometimes good teams steal a point or two during the season and I think this was the case last weekend.

Scoring three goals in one match is a rare occurrence.  Of the 432 matches played through 2013, Rapids had done it 41 times (9.5% of all matches).  On this night, Colorado outshot Philadelphia by a 15 to 11 toll although shots on target favored the Union 6 to 5.  So perhaps a tie was warranted?  Through 2013 and the first part of 2014 (52 matches) the following table show the average attempts and average shots on goal for the Rapids and their opponents.

Interestingly opponent’s attempts are fairly consistent regardless of the result, but when the shot on target increases over one’s opponent you start to see a trend.  So essentially the table above indicates the "quality" of the shot versus quantity of shots lobbed at the opponent is indicative of beating your opponent.  No big surprise, so then, what about shot quality?

Boiling soccer down to its roots is the holy grail of team analytics.  More so in Europe where player salaries are much more exorbitant than in the MLS. With an enforced salary cap finding value with someone able to shoot on target and score goals is the ultimate objective.  Soccer analytics is a much more shadowy world than other major sports.  The latest fad is a term called Expected Goals.  It’s purpose is to try and determine whether any one player has a more innate, natural ability to put the ball into the net.

For example, Deshorn Brown plays up top for his ability to get behind the defense, using his speed, and finding the net.  He has tallied six goals for the Rapids this season and led the team last year with 10 goals.  Most fans will tell you that while exciting, he tends to miss a lot of shots.  During the Union game last week, he had 5 shots, 1 shot on goal and one goal.  For the season he has taken 62 shots, 20 shots on goal and scored 6 goals.  You can view his shots taken (pink dots) and goal scored (red dots with "B") locations below. 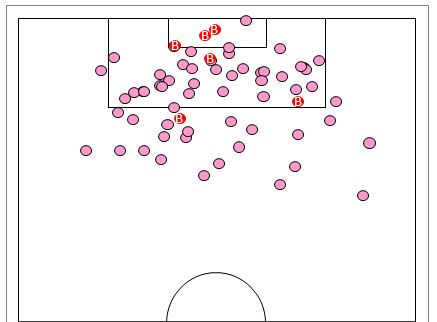 One can learn more about the model for expected goals by checking out this site or this site or this site or this site.  Much of the "under the hood" mechanics of expected goals seems to be obscured and hidden.  Sites above have published their estimates.  The easiest to understand is to simply determine distance from the net that the shot is taken.  One study looked at distance from the net in the MLS and the Premier League.  Using the shot chart above one can estimate distance to the goal from each shot location.  Using the formulas in the links above show that Brown’s estimated goals, based on the scatter of shots above, is around 4.7, so essentially based on where he takes shots he should have scored 5 goals this year.  Therefore as much as we moan about Brown’s finishing ability, perhaps we should be thankful that he has in fact scored one more goal than expected.  Although I suspect that goal off the deflection of the PK was probably a gimme.

Ultimately I don’t think any of this is rocket science to most soccer fans.  You put more balls towards the net, the more likely you will score.  The quality of those shots towards the net dictate if it finds the back of the net, and furthermore the distance with which you take that shot on net dictates the probability of scoring.  The trick then is getting players to take more quality shots (skill?) and in positions that are more likely to go in (luck?).