Dillon Serna Quietly Continues To Be Excellent With A Fabulous Game vs. Philadelphia

After a hot start to the year, the hype on Dillon Serna appears to have died down a bit. It's a shame, because he continues to be quietly excellent.

Share All sharing options for: Dillon Serna Quietly Continues To Be Excellent With A Fabulous Game vs. Philadelphia

I'll admit, I went into this post with a different idea in mind than usual. I was going to take a look at Carlos Alvarez and his first 25 minutes in burgundy, which I was impressed with. Indeed, looking at it he did do quite well with his passing, trying lots of very decisive, long passes throughout the pitch, though they didn't hit their mark more often than not in the final third. That idea morphed into this one when I decided to take a look at a few other players' works in the OPTA Chalkboard.

I hit upon Dillon Serna's, and this is what greeted me: 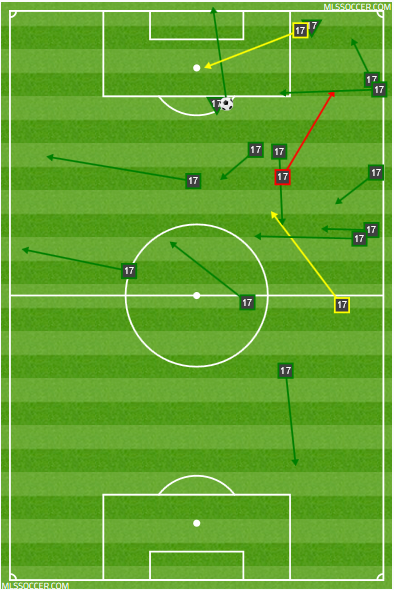 Well, then. I had actually forgotten that Serna had scored the first goal because of the wild ride that was the second half of that match, and this kind of came as a surprise to me. For context, every green box is a completed pass, the two green triangles are successful dribbles (which is when a player dribbles past a defending player and retains possession, also known as the thing that Messi does 32 times a match) and the goal is, obviously, a goal. The two yellow passes are key passes, which OPTA calls the final pass that sets up a shot. In all, it's a chalkboard worth giving a bit of applause to.

Serna wasn't incredibly involved in the 83 minutes of the match he saw against Philly, but when he was, he was clinical and created chances. Notably, nearly every one of those touches was in the first half, as the Rapids were desperately grasping for offense to try and catch up to Philly. He got the goal and was the best attacking player on the field for that first 45. Colorado's biggest issue this year has been finding guys who grab the game when offense is needed and take control; Serna did that against Philly, and without his goal, the comeback might never have come and we wouldn't have that point.

I think after the blistering start to the season -- remember the Red Bulls game? -- that Serna enjoyed, the hype on him fell a bit as the squad rotation started keeping him out of the squad more often and he, other than his goal against Seattle, wasn't doing anything particularly bonkers out there. The hype on Serna should not fall, though. He's still one of the brightest young talents on this team, and it's a shame that his superb match against Philly flew a bit under the radar because the spotlight-friendly Deshorn Brown and Dillon Powers also had good matches. A few more matches like this one, I think, and Serna won't be ignorable any more.