The Future Of Major League Soccer

The NASL's downfall was caused by huge salaries and rapid expansion. MLS is following a similar path right now, is their business plan better?

Share All sharing options for: The Future Of Major League Soccer

Hard to believe that three weeks ago, the Rapids were not only fighting Chivas but Mother Nature with a cold and snowy day.  This past Sunday's sunshine was plentiful and the Rapids responded with their most complete match of the year.   With an impressive cross by Wynne, a beautiful header by unmarked Brown and then the rout was on.  Amazing how an early goal can pretty much put a team on its heels.  Later on in the first half Brown, after receiving a nice pass from Powers, scored his second of the game and Rapids entered half time with a 2-0 lead.

Houston never seemed to get traction with the Rapids continued pressure.  Rapids finished the scoring with a goal of the week nominee from none other than Kamani Hill!  If you read my post last week you understand the scoring beast that is Kamani Time!  Great game by the team upfront this week.  Realistically the score could have been worse for Houston.

The Rapids now find themselves in 3rd place (!) with 21 points after 13 games.  This puts them on pace for 55 points.  While two home games against two struggling teams shouldn't indicate Rapids have solved all of their problems, it does suggest that the team is finding its stride.  It should also be noted that Pablo's incessant lineup juggling has slowed which theoretically is allowing the players to get on the same page.  With a mid-week match against Chicago and another match on Saturday against FC Dallas, the Rapids will have the World Cup break to catch their breath (sort of, a USOC game is scheduled for 6/17).

With the World Cup fast approaching and the sports media being what it is, reporters are now chasing the current story of the month.  These sudden soccer sport's writing pundits will disappear when their "sure" story no longer exists.  As a writer and year round soccer fan, I think the biggest story coming out of the World Cup games is the preponderance of MLS players on the US men's roster (15 out of original 30 called to camp).  A sure sign the MLS is beginning to produce what American soccer leagues have aimed for, for so long.
It hasn't been easy getting to this point.  Right now the MLS is on an upswing, but with two new teams joining the league in 2015 and the 22nd team signing on in 2017, one has to wonder if history might repeat itself.    With the Dempsey signing last year, Steve Davis wrote an article reminding the MLS of the collapse of the NASL. Then on Monday, the New York club, NYCFC, announced the signing of David Villa.  A 33 year old striker, plucked from Athletico Madrid, with an enormous pedigree.  It's been rumored that NYCFC isn't done and they hope to land another aging veteran from Europe before the month is out.  I get it, being a New York team that has a relationship with the Yankees and Manchester City, spending money and bringing in high profile players is to be expected - plus it's what New York sports teams do best.  Add to the mix the fact NYCFC is a new team, having to find new customers in a market with an established MLS team it makes lots of sense to reach out and make a splash. The question is, will the MLS continue to grow with US grown players or will the signing of aging European stars, thus causing of a meltdown much like Pele and the old NASL?

Back in mid-May ESPN and Fox put up $720 million on a new 8 year TV Deal to show MLS games.  Assuming a 24 team league, this would amount to about $3.75M per team, per year (if of course all that money was given to the teams).  In 2013, if you remove LA, NY, and Seattle from the salary question the remaining 16 teams average team salary was close to $4M.  So essentially the new deal would cover the salaries of current team payrolls.  Throw in the fact that in 2015 a new collective bargaining agreement with the player's union will begin and it will be interesting to see what happens to MLS player salaries.  With the MLS flush with new cash, players will certainly ensure that the minimum salary of $48,500 will be a thing of the past.  Anything look odd to you about this graph of distribution of player's salaries in the league (2014)? 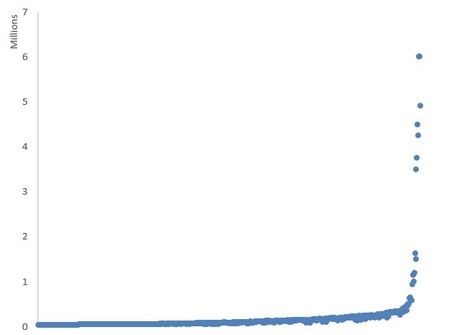 As sport's fans we have been inundated with athletes and owners alike crying foul when it comes to salaries.  In an area where salaries are known quantities, it makes the issue very contentious especially when your owners tout an 8 year TV deal.  While most people agree the current MLS and American soccer society are very different then 30 years ago when the NASL fell apart, I hope that sanity occurs come bargaining time, otherwise this paragraph, plucked from Wikipedia could find another use...

"At the close of the 1980 season, NASL's woes were beginning to mount, as NASL was feeling the effects of over-expansion, the economic recession, and disputes with the players union. In the early 1980s the U.S. economy went in the doldrums, with unemployment reaching 10.8% in 1982, its highest level since World War II. NASL's owners, who were losing money, were not immune from the broader economy."