Deshorn Brown had the most complete 90 minutes of his career on Sunday, showing off the immense ceiling he has. He won player of the week for his efforts.

Share All sharing options for: Deshorn Brown Wins Player Of The Week After His Best Match Yet

Thanks to his big performance over the weekend, Deshorn Brown has won the Player of the Week award from MLS. It was a richly deserved award for the Jamaican, as his performance was superb against the Houston Dynamo during Colorado's 3-0 victory. We need to talk a bit more about that performance, though -- it wasn't just a big performance, it was the best performance of his career so far.

Prior to Sunday, it was easy to point to Deshorn's best day as a Rapid. It had to be the two-goal outing that he had against Seattle during the 5-1 whipping that the Rapids served up late into the 2013 season. Certainly, that was a fantastic performance, but it was the kind of thing that Deshorn had been doing all year up to that point -- he was a bit lucky to go up against an off-night version of Deandre Yedlin who he could roast and toast every time the ball was lofted to him. This match featured a whole lot more variance in Deshorn's attacks, and showed the signs of the young man molding into a complete striker.

I said prior to this season that Deshorn legitimately had one of the highest ceilings of any striker in MLS, and I meant it. His physical tools have always been there, and it's only some other limitations that have held him back: tunnel vision, finishing, and off-the-ball movement were all issues in 2013, and some of that has carried over to his sophomore year -- to expect it not to would be silly -- but Deshorn seemed to be having no issues with any of that against Houston. It wasn't just that he scored two goals this time; it was how he scored them that impressed me.

Let's take a look at the first goal. 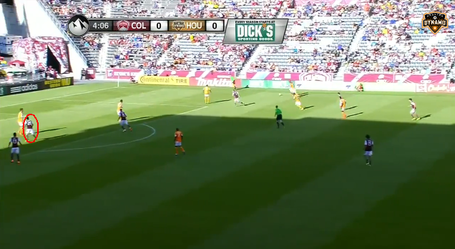 Deshorn did not have the best of times at center forward last year, and that was mostly due to issues with his off-the-ball movement and hold-up play. Last year, he did his best work when playing like a much stronger Omar Cummings. He was at his best when he was withdrawn and able to run into the path of the ball or get into one-on-one situations. Even when he was playing center forward, the majority of his goals came in a manner more deep-lying than anything (see: his goal against Real Salt Lake in Sandy and his goal against Chicago).

So in the screen above, you see Deshorn sitting between one of Houston's center backs and their right back with Marvell Wynne racing up the touchline. Brown has a few options here: he can try and drag some defenders away by getting their attention with a quick run, which would leave one of the other options in the box with some more space. He can race backwards in case Marvell wants an option to pass to at the top of the area, since a bunch of other people are bombing forward; in that case, he'll have a chance to run at the defense.

Or, of course, he could simply take advantage of the fact that the entire defense is ball-watching and instead barely move a muscle. 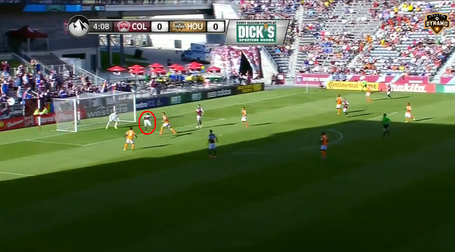 Jaime Castrillon, is that you?! Nobody has ever described Brown as 'sneaky' before, but that was some Castrillon level of 'sneak' there. Look at Houston's defense -- nearly everyone was watching the ball as Marvell made his run, and by the time that anyone started making a move towards Deshorn, it was too late. All he had to do to make the goal happen was shuffle about five yards and hope that the service was coming to him. We know that he's always been the type who can make things happen on his own, and that sometimes has led to a bit of selfishness on his part. Trusting his teammates to make the job easy for him hasn't appeared to be his strong suit, but he let it happen there.

That's an incredibly smart goal, and Deshorn did very well to put himself into the right spot to make it happen. Being in the right place at the right time might sound like something based on luck, but it's the sort of thing that a great striker (Conor Casey was pretty much the best at this we've ever seen in Colorado) makes happen for themselves.

His usual issues with finishing and tunnel vision were well dealt with on the second goal. The build up was a classic (I don't care if we're not even 1.5 seasons into their careers, this has happened enough times to be considered a classic) Powers to Brown play. 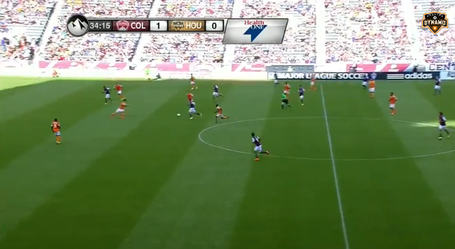 This is nothing new for Brown. He's able to find space in the channels just as well as anyone in MLS, and he made Powers' job easy by not only getting into the space, but also getting the angle on the defender closest to him so he can run into the ball with as little potential for interference as possible. (It is worth noting that yes, he was a touch offside there.) 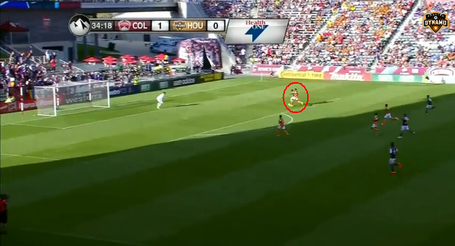 The ball is good, but not the absolute best, from Powers, and it gives the Dynamo defender a chance to catch up. We've seen this play break down on Brown's feet before, as he feels pressure and continues to run to try and escape it. In his first ever MLS match against FC Dallas, we saw him get the ball and run all day with it to avoid pressure, only to end up either at the goalkeeper or at the byline before finally trying to get a shot away. Shot selection and decision making have been Achilles heels before for Deshorn. Tally Hall isn't even charging off his line here, and he probably anticipated a run to come at him -- Hall is very good at making himself big in net, so that would be to his advantage. 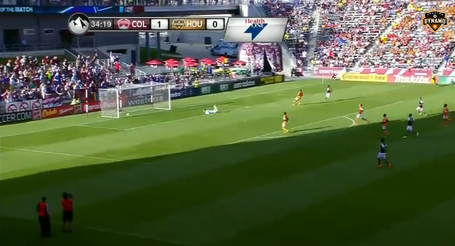 A calm and collected finish that appeared to catch Hall completely by surprise. Not only a finesse finish that we're not used to seeing from Deshorn, but one under duress as well. Once again, a smart goal, and a sign that he's slowly starting to turn into a more complete forward than the straight-up speed demon scoring mostly ridiculous goals that we saw last year.

There were plenty of other great tidbits from Deshorn this match. His passing was pretty good for a center forward, and he actually helped to create chances for other forwards instead of swallowing all of them up himself. He only took four shots all match, but made the ones he did take count.

He's obviously not going to be this good every single week, and we can probably expect to see a lot more growing pains as the year goes along. However, getting to see occasional flashes of his immense ceiling of talent in more and more frequent bursts, and this time for a full 90 minutes, is enough to make you salivate at the thought of his future for the Rapids.