A lot of factors make up an MLS side. Age does play a factor. Put simply, the young age of a team can determine who wins on any given day. I know this is naive, but sometimes the "sight test" of the field matters and this past weekend LA looked old and slow while the Rapids flew.

Share All sharing options for: An Age Old Question

With three matches to play in what was nine days, the Rapids unveiled a highly unusual starting 11 on Saturday’s match against the Galaxy.  My assumption was that Rapids wanted to hold out certain players for the match against San Jose on Wednesday.  Now whether the bizarre lineup messed up LA and made a difference is to be debated.

Playing two Rapkids (Serna and Hairston) on the wings, with Klute moving over the right side, and returning the dynamic duo of Moor and Wynne at the center defense positions certainly mixed things up. After the defense was exposed the previous week with Dempsey/Martins, I’m sure the Donovan/Keane pair was at the center of the Rapids attention for much of the week.

The match was a tale of two halves.  With Sanchez roaming up top with Brown, the Galaxy looked old and slow especially with Serna and Hairston on the wings. Sanchez's lone goal was the difference maker. In the second half with Sanchez’s injured knee and Hairston’s head injury, the game significantly changed to our side of the pitch.  In the end Keane’s PK went wide left and Rapids secured the victory.  The defense really redeemed itself and I thought Burch’s job on Donovan was pretty spectacular.

As suggested above, the Galaxy looked old and slow.  With two 20 year olds in Serna and Hairston, the back line for Galaxy had their hands full.  In fact the Rapids average age in the starting 11 was 26 compared with the Galaxy's 29.  So is youth better than experience?  Does youthful exuberance win out over a more game-intelligent team (assumption that intelligence comes with experience)? 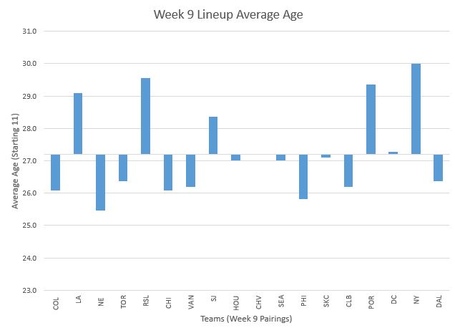 In addition to the starting 11, what about entire rosters?  Average age for entire MLS rosters is 26.0 years old (note: this is different from the 27.2 years of age above, which was just the starting lineups for this past weekend.) The average age per team counts all players on a team’s roster which includes about 26 players per team.  Currently only three teams in the top 5 in each conference have average roster ages greater than 26. The graph below shows average age of each team squad (approximately 26 players) and their average points earned per game in 2014 (through last weekends games). 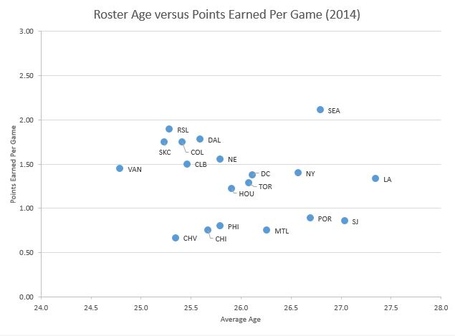 Nothing unusual jumps out although if you took Seattle and LA out of the graph above you’d see a broad trend of points per game decreasing with age (R2 of only 0.21).  Older teams (Seattle, LA, NY, POR, and SJ) range from just under 1 point a game up to Seattle which is claiming almost 2 points per game.  There is a nice grouping of younger teams averaging between 1.5 to 2 points which includes the Rapids along with Salt Lake, Dallas, NE, Sporting KC, and Columbus.  If making the playoffs requires around 50 points or about 1.5 points per match then the graph above shows the younger teams (at least this year) with the inside track after 9 matches played.

Due to the physical nature of soccer (i.e. the constant movement and the speed bursts), I would suggest age does matter.  Whether it is quantifiable is hard to say.  Overall MLS age distribution is a bit skewed towards 23 year old.  In baseball, break out years tend to occur around 26 and 27.  Does Soccer have this same range?  Do a number of years on the pitch "educate" a player to be a better playmaker?  It will be interesting to see what the average age of players are in this Summer’s World Cup.  My guess is you are looking at a World Cup Team average age of around 27 (both Zusi and Besler are this age, Bradley is 26, Gonzalez is 25 and Dempsey and Donovan are 31 and 32 respectively).

A lot of factors make up an MLS side.  Age does play a factor (as well as the fact that younger players aren't paid like cagey veterans). Put simply, the young age of a team can determine who wins on any given day.  I know this is naive, but sometimes the "sight test" on the field matters and this past weekend LA looked old and slow while the Rapids flew (and we’ll overlook the fact that Vicente Sanchez is 34!)