Lack of Scoring, Is There No Urgency?

The Rapids need to find the net. In time I am sure the ball will start to find its target but this weekend against a very weak Montreal, in Denver, it sure would be nice to find the net a lot!

Share All sharing options for: Lack of Scoring, Is There No Urgency?

"Without a sense of urgency, desire loses its value." – Jim Rohn

Guess Lady Luck turned her back on the Rapids this past weekend.  This past weekend’s match against our rivals had some calls, which we Rapids were receiving all year (Red Bulls anyone?), go against us.  One dreadful call, a PK score later, and Rapids found themselves down 2-0 in Salt Lake.

The interesting thing to note was from that point on (pride? embarrassment?), a real show of effort was found, and if we delete the first 50 minutes of play, the Rapids might have stolen three points and found an easier path to retaining the Rocky Mountain Cup.  Now we wait until August for Real’s visit to Dick’s, where hopefully, we can redeem ourselves and head back to Salt Lake in September with a fighting chance.

Rapids have lost two in row and certainly can’t overlook Montreal's visit this weekend after the debacle against Chivas two weeks ago.  Look for Montreal to play a similar game plan and hope to frustrate the Rapids into making defensive miscues and try to score on the counter.

Revisiting the match this past weekend, there was certainly a lack of urgency displayed by the Rapids against our bitter rivals.  Always tough on the road, but wouldn’t it have made more sense to strike with urgency at kick off versus letting your opponent dictate the game?  This isn’t something new with the Rapids this year.  Their average first goal has come in the 69th minute, with only one goal scored in the first half (against LA in 20th minute).  Last year the average first goal was scored in the 41st minute.

It has been well documented that this year’s Rapids have had trouble finding the back of the net.  Through 11 games they have outshot their opponents 142-128 but have only been on target 48 times with 12 goals (with 4 of these by PK and a fifth off of a PK rebound).  Last year they had 460 attempts on goal with 141 on target and 45 goals.

The table below shows the Rapids goal scoring acumen from 2010 to 2014.  PK goals have been removed from analysis.  Through 12 games if you take a shot percentage (shot %) which is goals scored from shots taken (8/142) and on target shot percentage (on target shot %) which is goals scored from shot on goal (8/48), one can see the statistical quirk the Rapids are dealing with so far this year. Currently they are well below their seasonal average and the MLS average.  So the Rapids have been sending a lot of balls towards the net, but either the quality of those shots (i.e. on target) have been poor or the Rapids have been unlucky?

To show this visually, if you take every team's on target shot versus goal scored per game from 2010 through 2014 you get the figure below.  The burgundy dot is what the Rapids are doing this year.  For whatever reason if they were even near league trends (dotted line), the Rapids ought to be scoring at about a 1.2 goals per game versus the dismal 0.7 which would be about 13 goals (without 4 PKs). 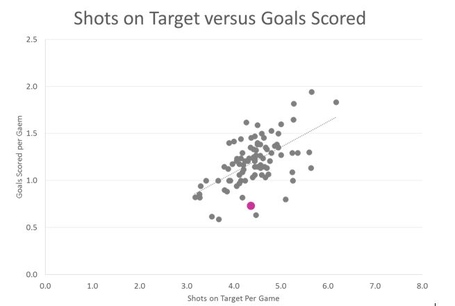 Now whether the offense is lulled into a lack of urgency because they know they have a solid defense or the defense knows it has to be a brick wall because the offense won’t score for them is an interesting debate.  Ultimately having to rely on your defense gets to be difficult over a 34 game season.  Having your offense relieve the pressure by scoring a few goals would be useful.  Data would suggest that perhaps balls put on net aren’t finding the back of the net as expected and the hope is, as the season goes on and the Rapids continue to take shots the goals scored will increase (we hope!).

At the onset, it would be nice to see the tempo increase, especially at home due to altitude, to put teams on the defensive. In the end though the Rapids need to find the net. In time I am sure the ball will start to find its target but this weekend against a very weak Montreal, in Denver, it sure would be nice to find the net a lot!