Thoughts On A Rocky Mountain Clash

A collection of thoughts on an eventful, though ultimately disappointing, meet-up between two clubs that still hate each other.

Share All sharing options for: Thoughts On A Rocky Mountain Clash

Rather than focus on a single storyline from the weekend, today's Wave features a collection of thoughts, observations, and analysis from the Rapids' 2-1 loss to bitter rival Real Salt Lake.

2) Powers as a withdrawn forward - Safe to say this move caught a number of people off-guard. While it was no doubt a creative approach to solving the Rapids' scoring woes, it seemed to pull Powers higher up the field, lessening his impact on the game. He dropped lower as the game went on, however, creating something very similar to the old 4-2-3-1 as Brown and Serna pushed up on the wings. Do I think it's a coincidence that the Rapids were exponentially more dangerous once he dropped lower? No... no, I do not.

3) Speaking of odd lineup decisions - Pablo spoke earlier this week about how he was going to start finding that steady group who will see the most minutes. Most fans were hoping this meant more consistency. Consistency in soccer is crucial to creating on-field chemistry between players; it's how they become comfortable with each other. Arguably, the most important group to do this with is defenders and yet, once again, questions were raised when O'Neill was left on the bench in favor of Marvell Wynne. To Wynne's credit, he had a relatively good game that included blocking what would have been a clear goal for RSL. One still has to wonder if the constant shuffle in the back is conserving Rapids players' fitness or saving opposing teams the trouble of breaking Colorado down.

4) A picture is worth a thousand words - Of all the images that came out of Saturday's Rocky Mountain Cup clash, this one has to be the greatest.

The photo also happens to be the new sidebar image of the Rapids subreddit thanks to this cheeky bet. As great as the photo is itself, it will no doubt further inspire feelings of disgust for Rapids fans among their neighbors to the west. That's perfect, since apparently some people are questioning the intensity of the Rocky Mountain Rivalry. August 2 is a long way away, but there's no reason not to get fired up now, right?

5) Support both near and far - Respect must be paid to the many Rapids fans who traveled to the cruel confines of Rio Tinto Stadium Saturday, but there was also a place for those (like myself) who couldn't make the drive out to Utah. Three Lions Pub on Colfax played host to many Centennial 38 members who weren't at the game and provided a proper atmosphere for fans in the area rooting for Colorado. It's a positive sign of a continually growing supporters group that is helping to cultivate the team's fanbase amongst residents. Personally, I had a fantastic time--other than the whole 2-1 loss thing. So cheers to you, C38 and Three Lions Pub. (For any interested, here's more information on events and venues supporting Colorado soccer. For C38 info, click here.)

6) That PK call - You should know that reading through the comments section of any article on MLSsoccer.com is a favorite pastime of mine, so I'll leave you with a bit of humor. Devon Sandoval drew a controversial penalty in the 50' against Clint Irwin (or wait, was it Drew Moor...). Travel on over to the comments section of the RSL-COL recap (completely dominated by RSL fans, by the way) and you'll find some compelling arguments as to why a penalty was "obviously" the correct call. Granted, opinions vary in the discussion, but this quote is by far my favorite:

"Moor shoves Devon on his face. Has to be a PK or there is not such thing. Try not to listen to the announcers and learn to watch the game instead."

On his face indeed... 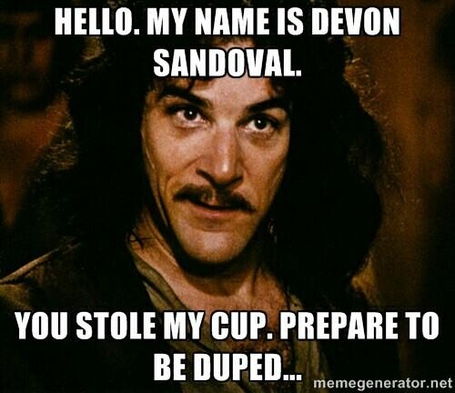 What do you have to add about the events from this weekend? Did the Rapids deserve to leave empty-handed? Did they show signs of improvement compared to that abysmal Chivas loss last week? Add your thoughts and comments below.