Gloom and Doom For The Colorado Rapids? How About Optimism

With about 20% or one fifth of the season in the books let’s look on the bright side and be thankful for being in 4th place (could be worse, we could be winless in Portland!).

Share All sharing options for: Gloom and Doom For The Colorado Rapids? How About Optimism

"You will go through tough times, it’s about getting through them." – David Beckham

Seven matches into the 2014 season and Rapids suddenly find themselves with more questions than answers.  After a 4-1 beat down by the Sounders this past weekend, suddenly that nice 3-1-2 start is beginning to look a bit gift worthy.  Pablo faces his first real test as manager trying to decipher why the ball can’t find the net as the Rapids face an always-difficult LA squad this upcoming weekend.  Oh, and this just in… let’s not put bulletin board worthy material for other teams to taunt as in "We don’t practice for certain players…". Quiet confidence among your team is fine, but boasting it before a match in a place you don’t play well and against a world class forward in Dempsey… probably not a good thing.  In addition, it would appear there could be derision in the clubhouse as well (based on the Buddle-Mwanga confrontation few weeks back) and this week's complaint from Chavez about playing time.  Could this tremendous start turn into an epic meltdown?

Pessimism versus optimism, glass half full or half empty.  Fandom is a miserable occupation -- Strong emotions, a desire for our team to be the best, and the ultimate illusion that as a fan you can cheer, wear the colors, but ultimately do nothing to put the ball into the net.  Frustrating, so as a writer trying to explain or comfort my feelings about the start of the 2014 season, I offer the following seven points, for seven games played.

1) Rapids are a good, young balanced team.  If you had asked me at the start of the season, if after the first seven games we would have 11 points, I would have said "yes please!".  Problem with such a start is our expectations rise.  At this rate the Rapids are on pace for 53 points (an all time high).

2) Seattle is a good soccer club.  This early in the season they are probably the best on the pitch across the league.  The Dempsey/Martin tandem is running on all cylinders.  Rapids ran into a buzzsaw last weekend.  It happens, and I don’t think we should look any deeper than that.  Seattle has been our Achilles heel.  Mind games aside, our Rapids got beat, move on.  Also look at the results of Week 8. The home team records this week were 6-0-3.  Winning on the road is difficult with teams being 29-14-28 this season.

3) Early season nagging injuries has been a deterrent in Pablo trying to get the team to adjust to a new schematic.  Nothing season ending, but having to shuffle the midfield each week and rotating forwards to try and find the hot foot just hasn't allowed for any consistency.  This past week culminated in a Rapids side that just looked out of whack.  It’s only April, I think we have some time to set things right.

4) To reiterate -- the Rapids are a young team.  Last year I think the newness and speed of our team caught most teams in the league off balance.  With the New Year, the book has been written on what to do to stop the Rapids.  I think more than anything, adjustments have been slow to come.  Again it’s April, Rapids will find their stroke.

5) As the schedule flips to May, the weather warms up and the Rapids play fewer games on turf.  Both Torres and Brown are not accustomed to the crazy Colorado weather.  Home games so far this season have been challenging.  Also throw in the fact that the Rapids have had to travel back and forth across the country, play on turf, and play on some less than ideal pitches and I imagine the team could use some normalcy and improve greatly because of it.

6) Disregard this past weekend and the defense, as usual, has kept the Rapids in matches.  Eventually, the offense will start to score goals.  I can’t accept that Torres, Brown, and Buddle will be kept in check the entire season.  Goal scoring is streaky.  At some point the ball will find the back of the net for the Rapids.

7) With May approaching, nothing gets any easier as LA comes to town, followed by a quick turnaround with a trip to San Jose (elbows anyone?), then Chivas, then Real Salt Lake (!), and finally Montreal.  Certainly some challenges but if the Rapids are going to step up this year this month is important.

And no post of mine would be complete without some table or graph.  Below I offer a glimpse of an average season since 2001.  The graphs below show point accumulation and total goals scored accumulation.  For instance through 10 games the highest point total for For the 2014 season, Rapids are playing about average after 7 games.  Goal scoring is also above average.  With about 20% or one fifth of the season in the books let’s look on the bright side and be thankful for being in 4th place (could be worse, we could be winless in Portland!). 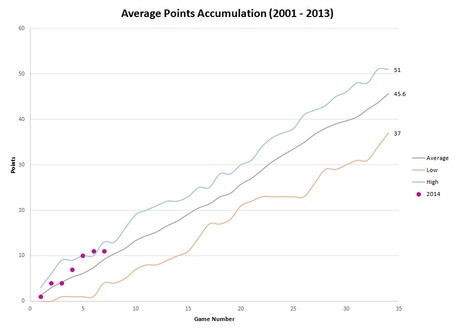 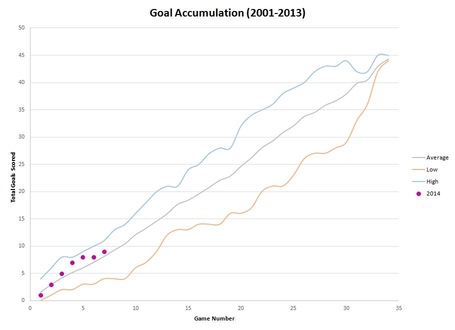