Tom Sermanni Fired By US Soccer After USWNT Match In Colorado

Another USWNT coach gone after a game at DSGP! This time, it wasn't planned... at least, not for the coach.

Share All sharing options for: Tom Sermanni Fired By US Soccer After USWNT Match In Colorado

The US Women's National team had a decent showing at Dick's Sporting Goods Park during a friendly against China on Sunday, getting goals from Lauren Holiday and Megan Rapinoe for a comfortable 2-0 victory.

Unfortunately, it apparently wasn't enough to impress US Soccer, who announced shortly after the victory that head coach Tom Sermanni had been relieved of his duties. During his tenure with the team, they won some impressive friendly matches but showed incredibly poorly in the Algarve Cup, where they managed only to muster a seventh-place performance. This match was their first since the Cup performance, and the US underachieved by only scoring two, considering the numerous chances that were provided to them. 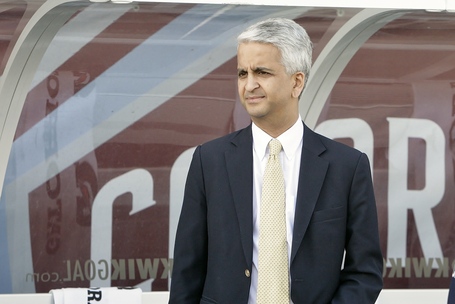 Sunil Gulati, the president of US Soccer, was at the match, possibly for the purpose of letting Sermanni he was being let go following the match. Gulati noted after the match that the timing is cutting somewhat close to the next Women's World Cup, only a year away at this point, saying, "We will begin looking for a new coach immediately to guide our Women's National Team toward qualifying for the 2015 FIFA Women's World Cup."

This is, funny enough, the second straight US Women's coach to leave the team following a match at Dick's Sporting Goods Park. Pia Sundhage's retirement performance came on the same field, a wild and fun 6-2 win over Australia that featured both tons of great goals and the best pun I've ever had in a game recap headline. That leave from the team was, of course, expected. Sermanni's was absolutely out of nowhere, and it will be interesting to see where the USWNT goes from here.

For more speculation and information on the potential reasons for Sermanni's out-of-nowhere firing, head over to Stars And Stripes FC.