Colorado Rapids vs. Vancouver Whitecaps - Jose Mari Was Your Man Of The Match

Normally I do a Man of the Match poll on Sundays. This time around, there's absolutely no chance; it was Jose Mari. And it wasn't just because of the goals.

Share All sharing options for: Colorado Rapids vs. Vancouver Whitecaps - Jose Mari Was Your Man Of The Match

Even when there is an obvious choice or clear winner most of the time, I usually make the effort and make a man of the match poll every Sunday to let everyone vote for a Colorado Rapids MotM. This time around, there's no chance. The winner is Jose Mari, and there's no question in my mind about that.

That wasn't a hasty conclusion either; trust me, Clint Irwin had a big part in the win and I know that. It wasn't just the goals that Mari scored, though. Certainly, scoring not one, but two Goal of the Week nominees is going to give you a big boost in a come-from-behind 2-1 win, but he did more than just score the goals. Playing in the pivot spot in the diamond 4-4-2 that Pablo Mastroeni sent out, Mari quietly had one of the best performances in defensive midfield that the Rapids have seen in a long time. It was a performance like some of those that I gushed about when Hendry Thomas first came to the team in late 2012, before he went into 2013 and started tackling a bit too hard and a bit too often.

Mari wasn't the busiest player on the field for the Rapids -- Dillon Powers and Marc Burch both had more plays they were involved in overall -- but he was immaculate at what he did nearly every time the ball came near him. Take a look at his Chalkboard. 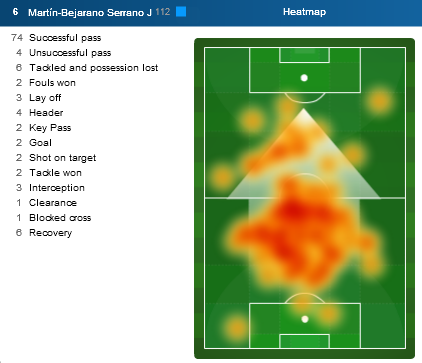 Incredibly efficient, smart at going forward and contributing to the offense in short spurts and seemingly always in position to help the defense out the rest of the time. That's exactly what you want from your pivot man, and he was great with the ball all game. This was reminiscent of a classic Pablo Mastroeni performance at his best, but with two goals piled on top. Even without the goals, he would probably be my choice for MotM simply because of the rest of his game.

Six lost possessions is absolutely fantastic for a midfielder that played the entire match. To give you an idea of how good that is, Nick Labrocca was on for only a short while in the second half, was only involved in 30 plays, and lost the ball seven times. Six lost possessions would be a good number for someone like a center back who only touches the ball 50 times in a game. Mari was involved in over twice that many plays.

Add to that the fact that Mari completed 95% of his passes and threw in a tidy 11 defensive plays to help out a somewhat shaky back line, you can probably easily say that Mari alone is responsible for the fact that Colorado was the better team on the ground for the majority of the game and, I think, the clear man of the match.

...One more time for good measure: