This Is Soccer Earthquakes, Not American Football

Does physical soccer win out over finesse soccer in the case of the Quakes and Rapids?

Share All sharing options for: This Is Soccer Earthquakes, Not American Football

"It was like the ref had a brand new yellow card and wanted to see if it worked." – Richard Rufus

I think we can safely say the Rapids nemesis over the past few seasons has been the San Jose Quakes.  More than any other team in the league, the Quakes seem to be the itch we can’t scratch, the sand stuck between our toes, and the pain in our rear.  Since 2010 the Rapids are 2-6-2 against their Northern California opponent and have not beaten them since August 2011.  This past weekend’s match was no different.  Intimidation and parking the bus defense from San Jose were at the forefront.

From the opening kickoff you could tell the Quakes desire was to score early and then just sit back in a defensive posture.  Throw some elbows, put Rapids on their heels, and collect their point on the road.  The Quakes have taken on the "Bad Boy" mantle much like the NBA Pistons in the late 80s.  There are many ways to collect points in the MLS but does San Jose deserve the "Bad Boy" tag? 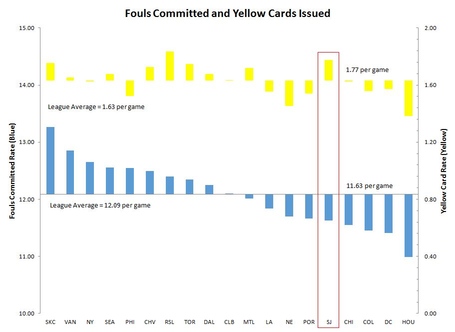 The figure above ranks the teams by fouls committed (data obtained from the MLS website, data compiled from 2010 – 2014).  San Jose is actually below average for fouls committed compared to the MLS average.  Where we do see San Jose jump up in the MLS rankings is yellow cards issued.  Their average is 1.77 a game, above the league average of 1.63, and second just behind Real Salt Lake who has the highest average yellows per game.  Since 2010 San Jose has been issued 21 red cards, again second most in the league behind Dallas and New England (22).  So for severity of fouls, San Jose does appear to live up to its image of being a physical club.  From the chart above you can see the Rapids are below average in both fouls committed and yellow cards booked.  Thus it is perhaps a case of physical soccer winning out over finesse soccer in the case of the Quakes and Rapids.

Just for fun which players commit the most fouls?  Top ten from 2010–2014 are shown below.  They are ranked by fouls committed per 90 minute game.

It is fascinating to see two current San Jose players in the Top Ten.  Due to the fact that both Gordon and Lenhart played for other teams before arriving in San Jose, I wonder if they were naturally physical or is this something being advocated by San Jose?

Pretty interesting that both Gordon and Lenhart’s foul rates went up after joining San Jose.  Although it should be noted they were physical players to begin.  For comparison I show Buddle suggesting that changing teams does make a slight difference but that generally how a player plays remains somewhat consistent regardless of the team.  In San Jose’s case though, it appears to be an accepted and perhaps taught style.

The Rapids have two more matches against San Jose this year.  San Jose aren’t going to change their wicked ways.  Perhaps Rapids should sharpen their elbows and play a bit more aggressively next time.