The Mystery Of Rapidman Solved? Evidence Suggests He Emigrated To Canada, Changed Identity

We've wondered for years what happened to our enigmatic old mascot, Rapidman. It appears that he's found a new job in Canada after changing his identity.

Share All sharing options for: The Mystery Of Rapidman Solved? Evidence Suggests He Emigrated To Canada, Changed Identity

The question has been boiling in the heads of Rapids fans for years: What happened to Rapidman? The big blue guy was Colorado's mascot from the start of the franchise up until the latest rebrand took his blue color and green jersey out of the picture, and he was replaced by some animals or something. But his legend remained, and his sudden disappearance was unsettling. Was Rapidman dead? Forced into slavery in the underground salt mines by the money-hungry Kroenke family?

Or did he simply go into hiding for a while, get his life together and re-emerge with a new identity? New evidence seems to suggest that that's exactly what happened. Surely, being the World Famous Rapidman™ would draw too much attention if he were to try and start over after spending the majority of his life shooting squirt guns at Mile High Stadium/Invesco Field, so a new identity was in order.

It appears that he lost his shades and gloves, grew his hair out, shifted his identity from a water man to a fire man (what more obvious identity switch could there be?) and emigrated to Canada. A few days ago, newly minted NASL side Ottawa Fury unveiled their new mascot, and... well, I'll leave it to you to decide. 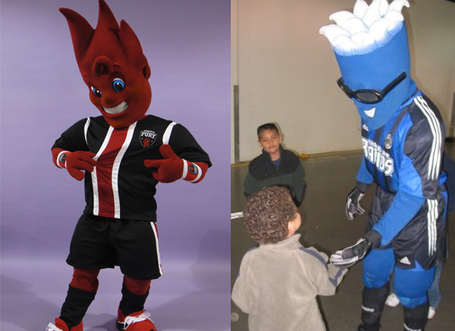 (By the way, if you don't go here and suggest the name "Red Rapidman", we're not friends any more.)