The Daily Wave: Money Makes the Ball Go Round

And those fans who think money is the answer to your playoff hopes should think again, maybe...

Share All sharing options for: The Daily Wave: Money Makes the Ball Go Round

"Goals are always in demand. There will always be a market for a striker who is fast, scores goals regularly and is strong. I've scored more than 100 goals and people know what they are buying." – Ronaldo

Thanks to our Northern neighbors for the three additional points this past weekend. With six points now, from two trips across the border, the Rapids have turned over a new leaf (Maple anyone?). These back to back wins on the road mean our Rapids are sitting in a tie for second place in the Western Conference. And to think the Rapids are doing this without goals from Brown or Torres. Look out if these two can find the net.

The match in Toronto was anything but pretty. With a field torn up and pitted, both teams plodded about. At the center of this tug of war was the ever mysterious and aloof Edson Buddle. Buddle, named after Pele, has been the one goal scorer that seemingly decides the Rapids fate. As already noted on this blog, 12 of the 17 wins for the Rapids have come with Buddle taking the pitch. Also as Chris Bianchi noted (@Rapids_News), Buddle has scored six goals for the Rapids, four of which have been game winners and when he scores the Rapids are 5-0-1. Pele indeed.

Rapids took on Buddle’s contract in December 2012 from the LA Galaxy. A contract worth about $225,000. What angered most Rapids fans at the time was why take an injured Buddle and not re-sign hometown favorite, Conor Casey? At the time Conor was making around $400,000. Money and MLS have always been strange bedfellows. Having watched league after league disintegrate in US’s sordid soccer past, MLS manages teams through a bizarre maze of economic check gates. With the advent of the Beckham Rule (i.e. Designated Players), the league has removed some gates and money has started to influence the balance of play.

Thus the trade for Buddle, whether it was a shrewd move by the Rapids or just a penny pinching exercise, has been a positive influence. A veteran presence that has taken the MLS pitch over 300 times and has now scored 99 goals.

So signing Buddle in 2012 saved the Rapids about $175,000 and brought in a player similar to Casey. Did saving that kind of cash make a difference? In addition, with the annual announcement of MLS salaries, what if anything can we glean from the data?

A perfect example of the "salaried cap" MLS was the match this past weekend against Toronto. This past winter, Toronto brought in two designated players in Defoe and Bradley, almost $12.7 million, to try and win the MLS Cup. Nagging injuries prevented their appearance last weekend but does this blatant hedge against the cap make a difference?

First a little history. MLS has published salaries back to 2007 (first year of the Designated Player ruling). The table below shows the league cap for each year. By multiplying this number by the number of teams you have the cap league salary in the fourth column. Compare this to what the league actually spent in the last column. These dollar values have all been adjusted for inflation to 2013 numbers.

Since there is a cap, any team choosing to go above this value, must assume there is value added in spending more on one or two or three players and how this might affect their bottom line and playoff hopes. My assumptions then are as follows: 1) By spending more money, clubs hope to finish better in the standings (duh), 2) If all teams only spent to the Cap, all teams would theoretically be equal, field similar squads, and thus each team would collect similar points. So in 2007, 13 teams played and 535 points were earned. If all these teams spent to their cap and were completely even in talent then each team should score around 41 points.

DC finished with 55 points or 14 points greater than what you’d expect if all teams were created equal (I know, a big assumption). They spent only $198K more than the cap so each additional point cost them about $14,000. Now compare that to LA, who spent $8 million above the cap and were -7 points below average. Not very cost effective.

So a lot of numbers, but what does it all mean? Well again my assumption was that teams pay more to win more. The figure below shows average money spent, above or below, and the team’s final table placement. 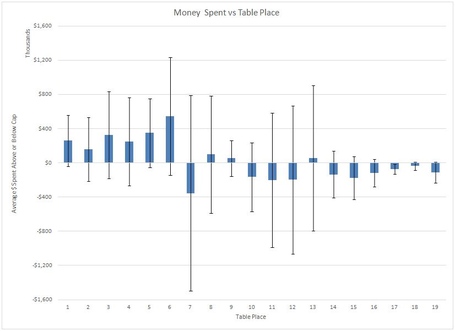 The error bars show standard deviation for each place. Quite the spread but generally to finish higher in the table, a team needs to spend above the cap. And since 2007 who has been the shrewdest in spending the least and winning the most ? 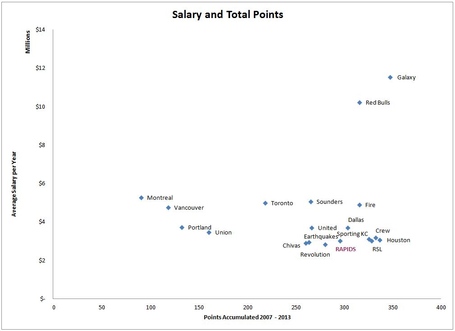 Houston has done an amazing job. And those fans who think money is the answer to your playoff hopes then think again, because throwing cash at the Cup won't always bring it home.