Slept through the off-season? Tried to make yourself forget what happened the past few months and are now just catching up to the fact that the 2014 season is days away? Not a Rapids fan and just want to know way too much about what's going on in Colorado? Here's part 1 of our four-part Colorado Rapids preview, covering the team.

The Colorado Rapids entered the 2013-2014 off-season with big hopes. They had turned around from possibly the most disappointing season in team history to perhaps the most thrilling. In 2013, the Rapids finished with the most points in team history and were a Camilo hat-trick on their final regular season game from having statistically the best defense in team history, as well. Despite finishing only 5th in the West in the end, the Rapids were actually in the Shield race all the way until the final couple of games and had plenty of keystone moments, including their first win over Seattle since 2010 and their first Rocky Mountain Cup win since the Fernando Clavijo era. It looked like the Rapids were going to achieve some very, very big things.

Unfortunately, Oscar Pareja did not stick around to finish what he started. It took months for the wheels to go from loosening to falling off, but Pareja eventually was pried away from Colorado and taken back to Texas, where he'll man the touchline at FC Dallas. Wilmer Cabrera also left, shuffling off to the vacant position at Chivas USA.

It's going to have to be another surprising year from the boys in Burgundy. And really, that's just the way we like it. What kind of silly world would it be if everyone's favorite ever-mid-table heroes were suddenly the favorites to win it all? Here's our big preview of the Colorado Rapids 2014 season, showing how Pablo's boys could surprise everyone... or not.

It's all up to Pablo. He was the Rapids' talisman for over a decade, the man who owns records for appearances and minutes played that will probably never be broken, or will take a very, very long time if they are to be. People have been saying for years that Pablo has the stuff to be a head coach, but I don't think any of us imagined that he would be using that stuff here, at least not so soon.

There's an innate gamble to using Pablo as head coach, the same one that the Rapids took when they hired Pareja, and the same one that all teams take when hiring young managers. He has never coached professional players before, though his work as one of the most respected captains in the game certainly couldn't hurt his resume. Players going straight into coaching from MLS are becoming more common, but a waiting period seems to be required in a lot of cases before young coaches can reach their potential. Even Jason Kreis, the prodigal son of US Soccer and the man who seems to be the heir apparent to Jurgen Klinsmann, started with a stumble when he took over RSL. 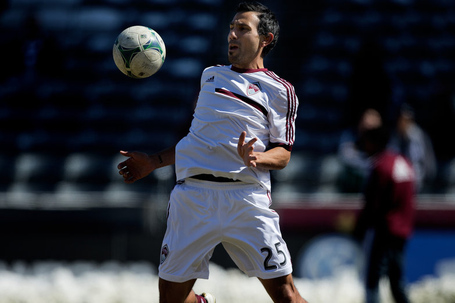 However, to say that this is a repeat of the Pareja situation would be a bit disingenuous. Pablo is lucky; he has a much better support system underneath him than most young coaches have when they come into a new job. It's rare that a coach willingly leaves a situation as good as the one Colorado was in at the end of 2013. They have one of the best young cores in the league and a distinct style already in place, one that Pablo (mostly) watched evolve himself. He also has some very smart soccer people around him, John Metgod chief among them, who will help guide him through his first year. When Pareja came in, he entered with visions of grandeur and relentless attacking, possession-based soccer. The team had an entire year wasted by Pareja trying to push that style regardless of what players he had. If anything bad is going to happen to Pablo's Rapids, it's not going to be that again.

It's all just guesswork until the team takes the field, though. If anyone tells you that they know exactly how Pablo is going to do in his first year, they're lying. People expected Oscar Pareja to succeed in his first year in Colorado, and his team stumbled into one of the worst seasons in franchise history. People expected Mike Petke to fail in his first year in New York, and his team won the Supporters' Shield. All I'm going to say is that, in terms of talent, this team isn't at the levels of New York from 2013, but it's far closer to that than it is the 2012 Rapids.

On the surface, it doesn't seem like the list of players that the Rapids lost is particularly nasty other than Hendry Thomas and Martin Rivero. Look deeper than the surface, and you'll notice that a lot of the guys who left are the guys we were considering part of the good depth of the team in 2013. Depth seems likely to be an issue this season, and the loss of the Mera, Castrillon and Calderon types could turn out to hurt when the big injury bug hits again. Here's the damages from the off-season:

Diego Calderon (Loan Expired) - A disappointing finish to the Rapids career of someone who was expected to be the biggest signing of 2013. Calderon was injured early in the 2013 season after a few solid appearances at center back, but never managed to push Shane O'Neill out of the starting center back role after that.

Jaime Castrillon (Option Declined) - I have a feeling that Castrillon will be a quickly forgotten man in Rapids lore, but he really shouldn't be. The Colombian was a great servant to the club, won the golden boot in 2012, and scored the goal that got the Rocky Mountain Cup back last year. In the end, age and injury left him expendable and that's why he won't be returning in 2014.

Steward Ceus (Option Declined) - We thought something was wrong when he had an absolute howler against Chivas USA in the preseason. Then he did it again against FC Dallas. And then again against Orlando City in the Open Cup.

Jamie Smith (Retired) - Jamie scored one fantastic goal in 2013 and then called it a night on his career, moving to work with the Rapids coaching staff.

Anthony Wallace (Out Of Contract) - After injury derailed and then ended his Rapids career, Wally has headed to Tampa, where I will be relentlessly creating #FreeWally chants until I get sick of doing so and move back to Colorado.

Atiba Harris (Traded) - The antithesis of what Pareja's preferred style of soccer was, Harris got minutes regardless because he scored a few early in the season and Oscar was desperate to find goalscorers as the year went along. Fortunately, the rest of the front office apparently realized that he wasn't a fit and dumped him into San Jose right after Pareja flew the coop.

Tony Cascio (Loan) - The good news about Cascio is that he'll probably be back. He joined a Houston team with a need for creativity in the midfield, which means that he's going to see at least a few minutes throughout the season. But we need not worry about him for another year.

Hendry Thomas (Option Declined, Traded) - This is going to be the one that stings the most. Thomas was never the kind of player that got the headlines (unless it was for the occasional altercation with a San Jose head coach), but his passing ability and tackling were invaluable to the Rapids last year as they upped from one of the worst defenses in team history to one of the best. Letting him go for naught but allocation money, to a division rival no less, was likely the worst story of the off-season for the Rapids.

German Mera (Loan Ended) - Mera was an odd case. He was brought in to be depth on the back-line, played generally well in his first few appearances as the prototypical 'big guy' in the back, and then didn't see more than a few minutes for a couple of months. Then, all of a sudden, he was thrust into a starting role in the playoffs and unsurprisingly was overwhelmed. When you hear tell of Oscar Pareja's roster management issues, Mera's a prime example.

Martin Rivero (Loan Ended) - Who knows where we would be if Rivero hadn't broken his foot in the 2013 preseason?

Marc Burch (Re-Entry) - If Burch sees a lot of minutes, bad things have probably happened. Burch can't really play on the right side, and Chris Klute will start every minute that it is humanly possible to start in 2014 at left back.

Marvin Chavez (Trade) - If there's anyone who the Rapids picked up other than Mari who might be up for big minutes in 2013, it's Chavez. He showed decently during the preseason and brings some veteran class to the forward corps that only Vicente Sanchez was providing before.

Marlon Hairston (SuperDraft) - None of the draft picks from this year will see a whole lot of time, in an ideal world. As the biggest 'project' of the group though, Hairston is probably the least likely to get a lot of run-outs in important games.

Grant van de Casteele (SuperDraft) - VDC might see some minutes this season because he's got size and positional awareness relative to his young age. If I'm picking a breakout candidate other than Dillon Serna on this roster, it's him.

Jared Watts (SuperDraft) - The most intriguing thing about Watts is that he was used as a center back frequently in preseason. So who is the back-up D-mid if Sturgis, Mari and Labrocca are all out of commission, then?

John Berner (SuperDraft) - He'll play as the third goalkeeper, so we're probably not going see or hear from him in quite some time. Move along.

Joe Nasco (Free Transfer) - For the first time in quite a long while, the Rapids have an experienced back-up goalkeeper. After several years of Steward Ceus, it will be nice to have a reliable and older guy to take over just in case Clint Irwin has any injury problems. (Nothing against Berner, but I doubt he's Clint Irwin 2.0.)

Polling all of Burgundy Wave's contributors, I got a tally of some of the players who might be worth keeping an eye on in terms of goals, assists, potential, and potential to disappoint. Here's what they said:

Top Scorer
Gabriel Torres and Deshorn Brown both got two votes a piece as top scorer, as both are expected to come into 2014 ready to take on a Casey-Cummings sort of duo role. Edson Buddle also got a vote here.

Most Assists:
Just like the top scoring vote, this ended up being a two-way tie between familiar faces Vicente Sanchez and Dillon Powers. Interestingly, Edson Buddle got a vote here, as well.

Most Likely to Breakout
Dillon Serna took this category home. He had two votes, with forgotten child Kamani Hill, draft pick Grant van de Casteele and mystery man Charles Eloundou being our other choices for the most exciting player to keep an eye on.

Most Likely to Disappoint
This was an interesting one, as there was no clear winner. Of the five staff who voted, each voted a different player. Marvell Wynne, Edson Buddle, Marvin Chavez, Chris Klute (!) and Jose Mari all got a vote each, echoing the question mark-type of season that we're in for.

See the rest of the Burgundy Wave Rapids Season Preview: