The Daily Wave: Scoring To Win

Can the Rapids be an elite-tier team? Only the goals will tell.

Share All sharing options for: The Daily Wave: Scoring To Win

"Sometimes in football you have to score goals." – Thierry Henry

Back for another year and I hope I can provide a little more insight into the beautiful game. My writing objectives are to look at the little things that make teams great. The MLS is an incredibly balanced league. You just have to look at last year and the mad scramble to make the 5th and final playoff spot to understand how dropping points can be crucial. It is probable that just a single point can determine your fate over a thirty-four game schedule on whether you’ll make a run to the MLS Cup. Therefore, I contend, it is the little things that teams do to make the playoffs.

It’s a NEW SEASON (Yay!), and if you read the quote above, you should know the connection. The Rapids' first test is against the New York Red Bulls. Red Bulls are coming off a Supporter’s Shield season. It will be an early season challenge against both the top team in the East last year and the New Jersey elements in March.

Colorado showed considerable growth last year and landed a playoff spot a year ahead of schedule (according to most pundits). This year, with a full season of their designated player, Gabriel Torres, and another year added on for the RapKids, I for one expect another playoff run. What, then, does it take to make the playoffs?

Since the advent of the Wild Card play-in game (2011), the four wild card teams have averaged about 50 points with 45 goals for and 42 goals against. This, to me, is the Wild Card Tier. Rapids, since 2008, have been a typical Wild Card Tier team. Nothing flashy, good defense, a team that is capable of hanging with the playoff teams but highly unlikely to make much noise. For half of the league, making the playoffs as a Wild Card would be considered a successful season.

As a fan though we always want more because who wants a winner take all playoff matchup? What would it take to host a game? What might the Rapids do to go beyond and make it into the Elite Tier? The Elite Tier being a top three team in the conference and guaranteeing at least one home playoff game. Since 2011 these teams have averaged 59 points with 53 goals for and 36 goals against. One can clearly see the big difference between the two tiers and that is the goal differential, 3 versus 17, which for the most part is driven by scoring goals.

The Rapids only allowed 38 goals last year. With a defense mostly intact from last year, Klute, O’Neill, Moor, and Wynne (or a replacement), it is likely Rapids will once again maintain their competitiveness just because they stay in games. The big question is, can Rapids score more goals?

Rapids scored 45 goals last year. They lost 10 goals from player departures so they need to find 10 and create another 5-10 to make it into the Elite Tier. Is that possible? Last year totals and returnees are shown below.

Can Brown repeat his rookie performance or will the league catch up with him? Can Powers remain healthy? Can Buddle find his stroke once more? What will Torres bring to a full MLS season? Unfortunately there is no crystal ball on goal scoring ability. From my gut I think with Brown, Buddle, and Torres roaming the pitch (and Serna’s maturity, see Spring Games), Rapids could have an offensive break out.

Since the majority of our goal scorers have returned to the mix this year, I was curious to see what efficiencies (inefficiencies?) might have existed in goal scoring last year with the eye that perhaps we might have been lucky (unlucky?) and if the law of averages work in our favor perhaps the goals we seek could be found with the help of stats. Below is a zone map I came up with reading an article. The study looked at goal scoring in the Dutch Eredivisie league. It broke the pitch into four zones as shown below (the fourth zone is in white). 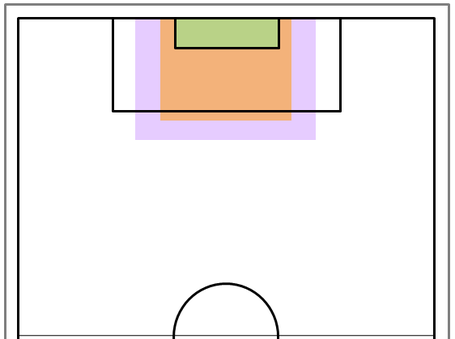 Next graphic shows every shot taken (in blue) and goal scored (in red) by the Rapids in 2013 (thanks to MLS matchcenter for the information). Rapids attempted 460 (457 shown below) shots during the 2013 season. 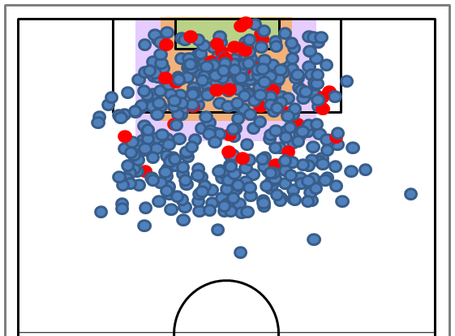 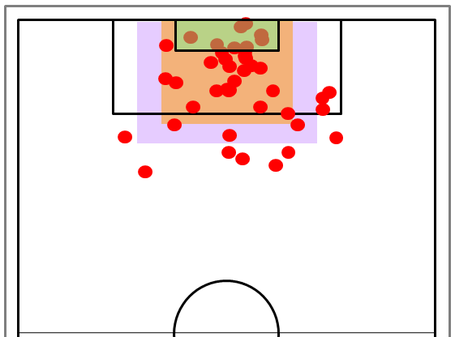 I then looked at whether the Rapids were efficient or inefficient last year when I calculated a conversion rate for each zone. Based on the article I compare the Rapids rate with the Eredivisie in the table below.

Obviously comparing Rapids to the entire Dutch league is a stretch. If I had the time and data (Opta anyone?), I could determine conversion rates for the entire MLS to then compare to the Rapids but for sake of this post, I will simply use the data that is available and make some generalities.

First thing to note is the Rapids poor finishing ability in Zone 1. This is in front of the net. Rapids scored 10 times in this zone but missed on 14 shots. Finding the net 75% of the time in this zone would net Rapids about 5 more goals, assuming the same number of shots. Netting 8% more in Zone 2 would give us about 12 more goals. Bottom line then is Rapids last year had the necessary shots on goal, and in fact outshot our opponents 65 times. Converting these shots into goals then is the key. Can Rapids be an Elite Tier team? Only the goals will tell.