The Daily Wave: PKs For Everyone

The Rapids were not “gifted” any PKs. Aggressiveness on the pitch has put us in the position to force the other teams to take clear red card offenses.

Share All sharing options for: The Daily Wave: PKs For Everyone

For anyone hoping MLS will become a "winter" league and follow the European schedule, I think we can safely assume that after this weekend, that thought will be tabled (I hope!). A brutal day for Rapid fans and Timber players but a great day for our boys in burgundy! A hard fought match with the good guys winning 2-0.

As suggested in the twitterverse, the man of the match should have been Nick Labrocca, who went short sleeves for the entire match.

With two matches in the books, the early story so far for this season has been the referee’s generosity in providing penalty kicks for the Rapids. Two goals have been straight PKs and a third was a rebound off a PK. As fans, we can take a glass 1/2 full/empty look at this predicament. Either we’ve been gifted three goals due to a referee’s decision and without these gifts the Rapids could have one loss (1-0 in NY) and one draw (0-0 against Timbers) or we can look at the Rapids aggressiveness in and around the goal box as being directly related to our win and draw. Of course, there is a third option - with all that aggressiveness, why can’t we score a straight up goal, but that is a discussion for another day.

Any fan will tell you the best referee is one that can’t be seen, meaning that after the match, the game was decided by the play on the pitch, not by the men in yellow. This is true for any sport, as the referee decisions are mostly subjective and a poor showing by a referee on match day can certainly sway a decision on the pitch. I am sure both NY and Portland fans would agree to this statement.

For baseline purposes, below are the MLS bookings per year since 2007. A fairly consistent spread.

Since refereeing is subjective when it comes to bookings what then do the numbers show (data found here and here). Below is a table of the Top 30 referees, by number of match’s refereed, since 2007.

Based on this data, the average referee gives about 3.15 yellow cards and 0.20 red cards per match. One standard deviation then puts yellow cards between 2.7 – 3.6 and red cards at 0.12 – 0.28 per match. A fairly tight range for something that is somewhat subjective. Therefore, over a five match spread you would expect one red card (although read below for more on this).

This past weekend Rapids might have been helped out specifically by the referee, Mark Geiger as he has given out 23 red cards over 99 matches, just above the average. And next match, we get Jose Carlos Rivero who has given 5 red cars over just 19 matches.

Numbers above are just counting numbers. Over so many matches, individual referee tendencies should get lost in the randomness of each individual match. Meaning, that a yellow card offense, while somewhat defined, should be called fairly consistently regardless of the man in yellow. The same, theoretically for a red card, although interpretations among referees probably do exist.

To try and determine if there is consistency among referees with their calls and to try to separate from match to match noise you should be able to look at one year’s of bookings and compare to the next year’s numbers. To try to determine if a referee is consistent in their calls you can look at the yellow and red cards awarded one year versus the following year. If a referee is consistent and following "rules" for issuing a yellow card you should have a high correlation between cards awarded from one year to the next. (Note: My data set used 17 referees with back-to-back years. Only referees with a minimum of 10 matches between each of the two years were used. There were 64 comparisons available from 2007 – 2013). 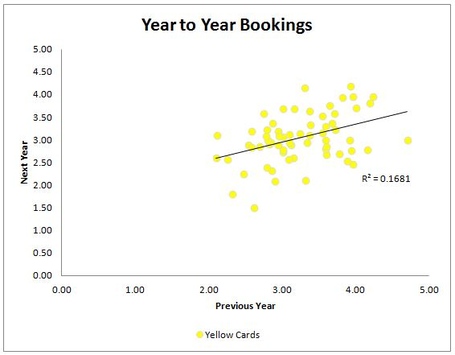 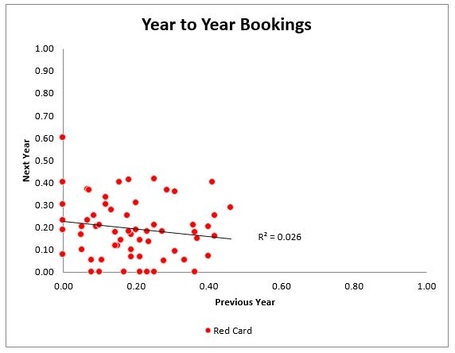 As you can see from the figures, the data doesn't trend in any direction and in fact the correlation coefficient across all pairs of years is just 0.17 for yellow cards and 0.03 for red cards. A value close to zero is evidence that there is in fact no correlation. In other words, knowing a referee’s tendency in one year gives you no information about what their ratio will be in the next. Further, the data for the red cards is almost perfectly and normally distributed which is additional evidence that there is little or no consistency (i.e. rules?) component evident in awarding a red.

I would conclude then, that certain referees aren’t more likely to give a red card but that a red card offense is so clear-cut that there is very little subjectivity when awarding one. Therefore I would suggest that the Rapids were not "gifted" any PKs. Aggressiveness on the pitch has put us in the position to force the other teams to take clear red card offenses.