Dillon Serna impressed both the fans and coach Steve Cooke in his first appearance last weekend against the New York Red Bulls.

Share All sharing options for: Homegrown Serna Gives Us Reasons To Smile

A week ago today, Dillon Serna, the Rapids pint-sized attacking wing galloped to his assigned position on the Red Bull Arena turf as soon as he could break loose from the starting XI’s obligatory pregame group photo. The moment marked another milestone in the Rapids organization youth development program. Then and there, Serna became the second of three "homegrown" Rapids players to have earned a MLS start. It is also proof positive that the Rapids FO is committed to developing from within their junior ranks. Last season we witnessed homegrown product Shane O’Neill, become a mainstay figure in the Rapids’ backline, and hopefully soon Davy Armstrong will join the Serna-O’Neill duo.

Serna made his first Rapids debut on the Rapids’ U-16 Developmental Academy team in 2009. That year, as well as in 2010, he impressed many and earned the opportunity to play in the Generation adidas Cup, the MLS’s annual elite youth soccer tourney for U-17 academy teams. His stellar performances earned him an invite to join the U-17 National Team in residency in Bradenton, Florida, where he was tutored by former Rapids’ assistant coach, Wilmer Cabrera, now the Head Coach of Chivas USA. Good grades there bought him a ticket to the 2011 CONCACAF U-17 Championship and 2011 FIFA U-17 World Cup in Mexico. 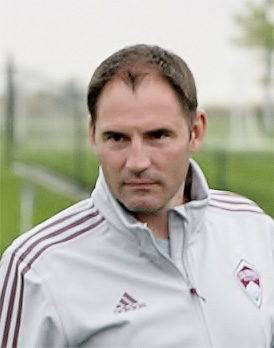 One of Serna’s closest mentors is Steve Cooke, Assistant Coach to Pablo Mastroeni. Before being appointed as Masteroeni’s right hand man, Cooke was a member of Oscar Pareja’s coaching staff, in addition to wearing many leadership hats within the Rapids youth development side.

After his debutant against New York, Cooke said of Serna’s progress through the Rapids’ youth development program: "He has always been a good player who has worked hard at his game. He has taken the most of every opportunity he has had, whether it be with our club or the U.S. National team."  Cooke added: "Dillon has really always made the best of every opportunity he has been given.  And here in New York, it was no exception."

On seeing Serna, a product of the program, make his first MLS start, Cooke reflected and stated, "I think that it is an outstanding moment firstly for Dillon, but secondly the Club as a whole. There have been many, many people have worked with him over the years who all deserve a great deal of credit. Like with any young player who gets selected for a professional team, there area lot of people who added to that player’s development. I am someone who has worked with Dillon, but there are many others as well. But the real credit goes to Dillon for the work hard that he has put in."

In his last season with the Rapids U-18 DA Team during the 2011-2012 season, Serna led the team with 12 goals. He helped the team finish sixth in the USSF National Development Academy league. In July 2012, he joined the U.S. U-20 National Team for the Milk Cup in Northern Ireland. On January 18, 2013, Rapids’ Technical Director Paul Bravo tendered him a contract, and RapKid Serna signed on the dotted line.

"His dedication and hard work, as well as the effort of all the Rapids coaches who have spent time with him over the last several years, have paid off with this well-deserved opportunity." said Bravo at the signing. With Serna inked, Oscar Pareja put this prospect on the fast track. Under Pareja, Serna trained with first team, and played in seven of the team’s 10 official Reserve League matches, starting in several.

Fast forward to March 14, 2014; the pesky lefty make his MLS debut as a starter, and he did not disappoint. He played the full game, led the squad with four shots on goal, two of which almost curled in.  "We think he did very well. Obviously when you go to NY on the first game of the season and make your first game as a starter, it is not as easy as it may sounds for anybody. Dillon is a 19 year old coming in and we though he did very well." said Cooke.

"We were very pleased with him from a defensive standpoint and on the wings throughout the game. We started on the right, then we moved him to left late, and he made key contributions. We felt that he was unlucky not to get himself on the score sheet."

"Getting the start was unbelievable," said Serna after the match. "I’m just as excited for our home opener," he added with a bright smile. Let’s hope that Serna keeps up his attacking tendencies and earns many more opportunities to be called on to join the starting XI. That should give the Rapids’ faithful and Serna wannabes in the Rapids Academy more reasons to smile.

By the way, Serna’s Rapkid teenage era will come to a close on March 25th when he turns 20 years old. Happy Birthday!