The Daily Wave: Scoring Is An Art?

Rapids need to strike often with our designated player and keep an eye out for Brown for when he develops the art of scoring.

Share All sharing options for: The Daily Wave: Scoring Is An Art?

"To be a striker you need to be in good shape." – Pele

Preseason drama is finally over and we now have real soccer to talk about. First match is in the books and for all the national naysayers; I think the Rapids deafen the noise of the off-season chaos with a very good match. The team, despite an early Red Bull attack, held tough and ultimately controlled much of the middle 50 minutes of the match. With a lineup of newcomers (Mari and Chavez[sub]) and rookies (Serna and Berner), stealing a point in New York was a good start to the 2014 campaign. Next up is the home opening match against the defending Western Conference champs in the Timbers. Timbers, with two home games, have struggled to two draws.

All was not perfect though on Saturday afternoon. The Rapids goal came from a very soft penalty in the box giving Sanchez the opening goal of the season. Rapids had chances. Once again the team seems tentative to declare, among themselves, who should be the dominant goal scorer for this team. Based on the lineup, it would appear that the "striker" role was given to Deshorn Brown, leading goal scorer from a year ago and the current hot foot from spring time Jamaican friendlies.

Brown plays with speed and passion. If I had to guess, the speed part helped make him a great goal scorer in his youth. At the professional level, in my opinion, goal scoring is less brute strength but more of an art. You need an innate ability to be at the right place at the right time. Watching the great goal scorers of our time, there are certainly those that score with brute force, whether it is through speed or ability, but often times they score where others can’t. Brown is at that difficult transition, where he can still get the brute force goals, but rarely does he make any art in finding the memorable goal of the week. I think the front office realized that Brown was a work in progress last year and thus the signing of Gabriel Torres. Torres could essentially take the reins of "striker" and allow Brown to grow a little.

Thus we turn to the opening draw this past weekend. The Rapids had some glaring deficiencies in their first match. One was the play at right back and O’Neill, certainly a work in progress. Second, and a bigger concern, was the entire left side of the pitch. The Klute and Torres duo amounted to a giant goose egg. Not exactly what you want to see from your Designated Player. To not even have a shot on goal is glaring. Below, thanks to MLS Matchcenter, is Torres’ play on Saturday. 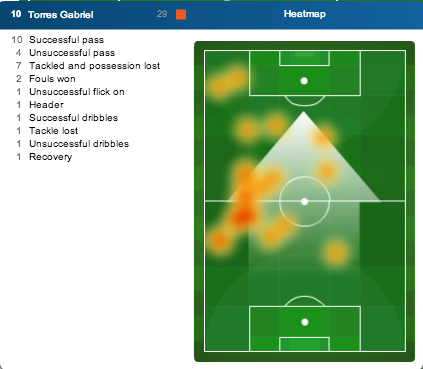 Torres predominant position was in the midfield. Not exactly the optimal position for your intended goal scorer. It is possible New York chose to control this side of the pitch and keep Klute and Torres quiet. If so, Serna was up to the task and controlled the right side of the pitch throughout the match. Brown’s play up the middle was with his usual speed and urgency. It will be interesting to see what the Rapids do this week. The question for the upcoming match is, why Brown and not Torres as the striker?

Was the 4-2-3-1 that Rapids used in New York the right formation? Below is the overall play of the Rapids last weekend. I would say there was a giant black hole in the upper third of the pitch that needs to be fixed. 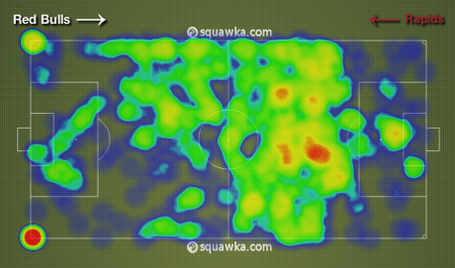 Last year when Torres was brought to Colorado, Brown was moved out to the left. Below shows Brown’s positions at the end of last season for the 10/5 game against Seattle, 10/18 game against Vancouver, and 10/27 game against Vancouver. In these games he tallied three goals and Torres tallied three goals as well. Rapids went two and one down the stretch, playing Torres on the right side (4-3-3 and 4-2-3-1) or in the center in one game (4-2-3-1). In those three games Rapids tallied 43 shots on goal, 17 on target, and scored 8 times (granted one of those games they scored 5 and were shut out in Vancouver).

As the heatmaps show Brown played comfortably in this left side position. Much more in front than what Torres had played in the season opener. Again, this could have been New York’s plan and Serna’s success could have been due to the Red Bulls desire not to get beat. Either way, Torres needs to adjust or the Rapids need to put him in a position to succeed. Below are the Torres games during the same stretch where Brown played on the left. This positioning would suggest a natural understanding of a striker type position, roaming the upper third with swagger and instinct. Certainly more comfort than what was shone last week.

Ultimately, the Rapids controlled much of the game with solid midfield play and man of the match type playing from Serna. The match for Torres could simply have been a decoy, although with the injury to Klute, play on the left becomes more important as teams will simply shift to where the attack will most likely be. It will also be interesting to see Buddle’s place moving forward.

A conservative start on the road was probably warranted but with Western Conference foes coming to town, Rapids need to strike often with our designated player and keep an eye out for Brown for when he develops the art of scoring. Pablo was on the pitch when we had the Casey/Cummings tandem, let’s see if he can’t find that goal scoring one two punch again.