The Colorado Rapids played their final 2014 season home game at the weekend & sadly it ended in what is an all too familiar story this year with a 1-0 loss to Oscar Pareja’s FC Dallas side. However one of the big talking points of the afternoon was a plane flying over the stadium trailing a banner which read ‘YOU HAVE WRECKED OUR CLUB, KSE & HINCHEY OUT!’ It was certainly an action that went a little further than the odd piece of cardboard being held up in the stands calling for the target of your choice to be fired. More than a few commentators, while not all of them being 100% behind exact tone of the message have expressed the opinion that is great to see & speculating that whoever is behind this clearly cares deeply about the team. 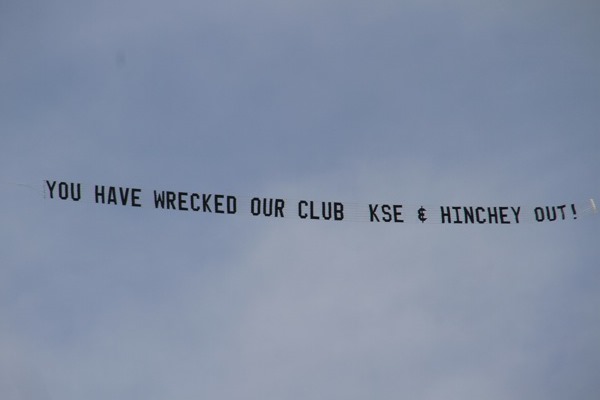 While admittedly rare in American soccer, it should be noted that visible fan protest is an active ingredient in the game oversees. In March this year, Manchester United fans paid for a plane to fly a banner which read ‘Wrong One — Moyes Out’ above Old Trafford. You could argue it was a successful undertaking as David Moyes was sacked as Manager at the end of the season. Also this year, Newcastle boss Alan Pardew has had to put up with protest cards being held up at multiple matches, both home & away, courtesy of the highly organized ‘Sack Pardew’ website, which details the reasons why the protesting group of fans think he should be let go. Certainly in England the attitude from those in charge of the game is that the fans pay their money & are entitled to their point of view, providing any protest actions maintain a certain standard of taste.

So far, whoever organized the plane has preferred to remain silent & Rapids supporters have not been shy to dissect the message in the various online discussion places. Theories abound to the exact motivation but I would like to suggest that since DSG Park has a history of suppressing protest banners & similar actions, the perpetrator(s) decided that the air was the only place their message could freely be displayed. The incident comes in a week where another off-field story involving the firing of the Rapids beat writer Chris Bianchi has put the question of the team & the league controlling what’s written about & said about them firmly in the spotlight. A third distantly related story regarding Jürgen Klinsmann’s comments about the standard of play in MLS & league commissioner Don Garber’s subsequent defensive response (complete with ‘Sunil Gulati is my buddy so watch out’ refrain!) completes a trio of stories that have now been reported way beyond the Colorado state lines.

Clearly the main source of the current frustration is the on-field results as Rapids fans are being asked to accept a 2nd season in 3 years where the team is nowhere near competitive or fun to watch due to ‘rebuilding’ as a first year coach gets to grips with his work. Countless words have already been written about whether you should blame coach Pablo Mastroeni, former coach Oscar Pareja or the club’s VP of Soccer Operations, Paul Bravo. Generally the comments fall in to one of two themes; firstly which players or staff should be fired & secondly how patient you are coupled with how much you trust that there is a grand plan which will come together in a few months or next season (delete according to time of year!).

On the more impatient end of the supporters viewpoints is the charge that Rapids owner Kroenke Sports Enterprises (KSE) are basically asking the fans to accept mediocrity year after year in a league which is improving with every season. This year it was the new coach & next year, if they are unlucky with injuries, lose a few games due to a few bad calls & none of the draft picks or veterans shine, there will be another excuse followed by some reasoning why we should be patient. The main accusation leveled is that KSE is cheap & won’t drop several million dollars on a superstar designated player. Aside from that, and despite Stan holding a majority stake in Arsenal, KSE is simply not an organization where soccer is a priority or something that is engrained in the company culture & a lot of the decisions show it. Rapids fans have long suspected that the team is an ‘afterthought’ or a ‘tax write-off’ & are only playing at DSG Park due to KSE wanting to pursue the real estate development opportunities there. Clearly the club is in a better shape since KSE acquired it in 2003 & because of that they do deserve some respect. But the time is now to start seriously considering seeing if there is a truly soccer focused owner or group out there to pass the baton on to, before the club is left even further behind in a league that is getting bigger & better every year. A deal to buy just the DSG Park stadium & let KSE keep the surrounding development land should not be outside the realms of possibility. Alternatively (if you really want to dream!), the new owners could lease DSG Park to give the Rapids somewhere to play while that downtown stadium is completed…

Stepping one level down the ownership / management chain we have club president Tim Hinchey who has provided a fun side story to the Chris Bianchi firing. Irrespective of whether you should be reaching out to someone who tweets something that’s not 100% positive about your club, there is a right way & a wrong way to go about this. And Hinchey clearly went about this one the wrong way. His first email to Bianchi (‘Explain to me your point Chris or don't ever reach out to me again. Period.’) sets a controlling & thoroughly unprofessional tone & the email exchange goes downhill from that point on. You have to wonder why a simple ‘please see me in my office ASAP’ message or a phone call wasn’t his chosen way to deal with this. The fans have now been handed a bit of a catchphrase with Hinchey’s final email salvo, ‘Enjoy the weather’, a reference to Bianchi’s main job as a meteorologist. Sadly this is not the first time Hinchey has been caught acting this manner to members of the media or the fan base, it’s just this time he picked on someone with not a lot to lose & an address book full of media contacts. The resulting national attention is pretty embarrassing for the club & makes Hinchey look like a terrible ambassador. It will be interesting to see if KSE, who are known to not like bad publicity one bit, take any action against Hinchey as a result of this episode.

Most supporters (well at least the ones who don’t have millions in the bank!) understand that they have very little direct influence over who is owning or running their clubs. Speaking out against your team or its ownership is a risky business which may result in sanctions from the club, less than complimentary media coverage & being thought of as stupid or singled out as having extreme views by your fellow fans. Therefore in most cases, those that do rise up should be applauded for exercising their rights, even if their message is not fully agreeable. This is especially important when you have an organization that is clearly not right & worse still is suspected of trying to stamp out supporter dissent. A fan base that carries out safe and legal protest action once in a while when things are not going well, is a vibrant & an engaged one, and is most definitely an asset rather than a liability for their club.