Last night was an interesting look at the news (in two languages) for anyone who follows Tony Cascio.

Tony Cascio has a twitter feed, but you'd hardly know it from following him most of the time. He rarely, if ever, posts unless it's after a big win, and he's not the type to tweet in bunches. Indeed, he has a tweet ratio of maybe one a month, if that.

Despite that, his professional athlete status has garnered him over 800 followers, which makes him a fine target for the wonderful world of twitter hax. And haxed he was last night. It all started fairly innocently, with him randomly spewing out a tweet in Russian, which translated to, "The head of the construction company from Krasnoyarsk killed in a shootout with Caucasians".

Odd, but not unheard of, I guess. Perhaps Tony has secretly been a Russian major this whole time and none of us knew? Or maybe he was just reeeeally interested in the Russian news. He followed that up with a bit about the Aurora shooting.

Again, odd to see him randomly tweet out of the blue, but it was topical since the shooting was exactly one year ago today.

Of course, it couldn't just be simple and end there, and we eventually realized that Cascio was the victim of a rather news-happy spambot or just a very enterprising hacker who was copy and pasting every news event he could find into Tony's twitter feed. Or judging by these, it might be Wells Thompson's Russian brother. 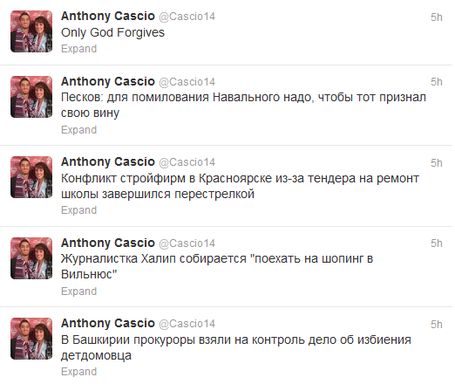 Yeah. This went on for two hours or so, with the most random of random headlines. My favorite:

After that two hours of non-stop hackage, Tony finally found out he had been hacked, and made what was probably the only tweet actually by him all night.

Ah, finally, the spamming of ou-

I have to assume he's still deep in thought over what his new password should be, because I don't think he ever actually changed it. Or he changed it from 'Password' to 'Password12345' or something. (It's the same combination that he has on his luggage!) May we suggest 'CascioTime12345' instead?

As of this writing (just before 3 a.m. MT) the non-stop twitter spam is still flowing freely from the account, and has been for some six hours now. We hope that it's curtailed soon, because he's starting to turn into @Horse_ebooks.

But hey, at least his account didn't get hacked in the Tyler Seguin manner, eh?