Colorado lost to Orlando City in the third round of the Open Cup, largely because Oscar Pareja let Steward Ceus start the match. (He did not finish the match)

Prior to the start of the game tonight, I had a conversation with an internet friend who supports Orlando City. It looked like this: 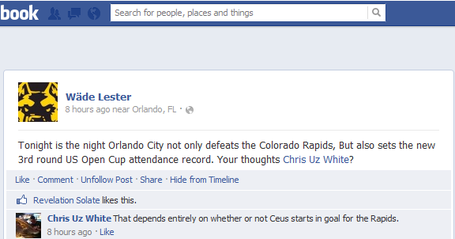 That's pretty much all you need to know about this one.

Ceus gave up a big softie of a goal right at the start of the game, the Rapids were able to strike back through Kamani Hill, and then Ceus said 'You're not stopping me that easily!' and gave up another goal and a red card right after the start of the second half. The rest of the team didn't play incredbly badly -- Shane O'Neill even stopped a Dallas-esque screw-up by Ceus from going in to keep it from getting too out of hand -- but there was no way back once they went down 2-1 and went down to 10 men.

Orlando scored one more time with Colorado struggling to hold the ball with 10 men.