Saturday brings the second installment of the Rocky Mountain Cup to DSGP with the Rapids hoping to notch their first win of the season that would put them in the driving seat to win back the trophy. Here's how to beat Real Salt Lake.

Saturday brings Real Salt Lake to DSGP for the second installment of this season's Rocky Mountain Cup. The two shared the spoils in a 1-1 draw at Rio Tinto Stadium on Rivalry Week in a game in which the Rapids squandered numerous chances before a late Alvaro Saborio goal stole a point for RSL.

It has been a mixed start for Jason Kreis' men - an opening day victory at San Jose Earthquakes was then followed by three without success until last weekend's 2-1 win against Seattle Sounders. For the Rapids, the quest for a victory continues after giving up a 2-goal lead at home against the Portland Timbers albeit with a very inexperienced and much changed team taking the field.

It is well known that RSL favour a narrow diamond 4-4-2 formation with Kyle Beckerman as the anchor but it is up in the air as to who will fill the remaining midfield positions. With the return of their talismanic playmaker, Javier Morales, Kreis has a dilemma over who to drop out of Ned Grabavoy, Luis Gil and Sebastian Velasquez. If Morales is deemed fit enough to start on Saturday, it is likely he will displace Gil at the top of the diamond as was seen with his substitution against the Sounders. 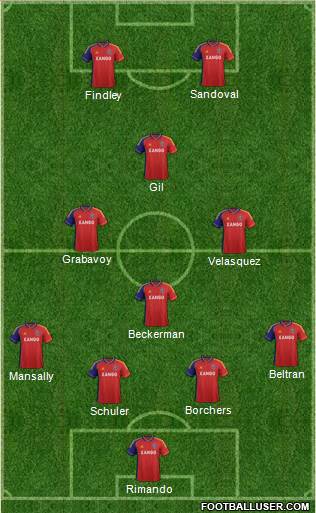 Does that indicate that Kreis isn't comfortable with shifting Gil back into the central midfield and dropping Grabavoy or Velasquez? I'm not sure. All three options are highly technical players but Grabavoy has the edge on them in terms of experience - something which Kreis could see as a much needed attribute in a matchup against their biggest rivals. Grabavoy is also a guy who covers a lot of ground in the box-to-box role, again something which is vital on the road.

To choose between Gil and Velasquez is a tough call. Both have their pros and cons. Velasquez has started the season very well and has played every minute of every game so far in the central midfield role, whereas Gil has been away with the US U20s, meaning his start has been somewhat stuttered. Gil's performance at the weekend though will aid his case for a starting spot but it looks too hard to dislodge Velasquez at the minute. To start both and leave out Grabavoy could still happen but would be a big risk for Kreis, one which I doubt he will take coming into a pivotal game against rivals.

In defence, RSL have been strengthened with the return of Nat Borchers who played over Kwame Watson-Siriboe against Seattle and did much to solidify a sometimes dodgy backline. Watson-Siriboe's proneness to a mistake was on display when RSL last met the Rapids when DeShorn Brown picked his pocket and slid home his first ever goal in MLS. Kreis might be looking to rotate centrebacks but I doubt so after the result against the Sounders and Watson-Siriboe's previous performance against the Rapids.

It has been like musical chairs up top for RSL. Injuries have ensured that they have had to field three different strike partnerships in five games and this lack of continuity has damaged their goalscoring prowess. Another partnership looks likely this weekend too with both Robbie Findley and Joao Plata likely to miss out through injury. This will mean the return of Alvaro Saborio, who has struggled with injuries since being on international duty with Costa Rica, alongside Devon Sandoval who impressed many with his performance against the Sounders.

The strength of Sandoval will be tough for Shane O'Neill and Marvell Wynne to deal with and they will have to make sure that the mayhem Sandoval has the potential to cause doesn't mean that they take their eyes off of Sabo for a minute.

For the Rapids, the key to shutting down RSL is keeping the midfield quiet. They need to stem the creativity of Beckerman and co. which in turn (if the Rapids keep the mistakes to a minimum) will stop Saborio getting a sniff of goal. Hendry Thomas and Nick LaBrocca will have to remain disciplined in defence to stop this from happening meaning they might have to play a little deeper than against the Timbers. Going forward, utilising Brown's pace in behind once again will certainly be useful providing he takes his chances. Borchers and Schuler don't have the pace to keep up with Brown as we saw numerous times at Rio Tinto and this should be one area that is being focused on in the preparation for the match. As well, as seen against Portland, getting the ball to Powers further up the field is important as he has the ability to both create chances and shoot from range.

As always for these two teams, this game is huge. A win for the Rapids will mean that anything other than a victory for RSL at DSGP (which they have only achieved once in MLS) in the final game would mean the Rocky Mountain Cup returns to Colorado for the first time since 2006. A win would also be the Rapids' first of the season which would be much deserved as the efforts of the boys in every game so far have been undone by silly individual mistakes. By cutting these out and retaining the same intensity as against the Timbers despite missing many first teamers through injury would put us in with a chance to nick the win.