This Saturday brings the home opener for Colorado Rapids with ex-Rapids striker Conor Casey's new team, Philadelphia Union, being the visitors at DSGP.

Opening day didn't go as planned for the Rapids but Pareja's possession-based game was clear to see, however, with the Rapids dominating the ball 63%-37% with the amount of chances created being the only (but rather large) issue of the game. Home openers are always biggies - it's the first game in front of the home fans after a long 4/5 months. It's also the first chance for many of the fans to see the final product of a full preseasons work including the new look roster. In our case, this is particularly pertinent considering the amount of movement in and out of DSGP this off-season. So this game means a lot. To shake off the opening day defeat and regain the momentum is really important but it won't be easy.

The Union are coming to Colorado on the back of what looked quite a painful opening day defeat against Sporting Kansas City in which they (they being Sebastian Le Toux) squandered numerous golden opportunities to put the tie out of sight before half-time before getting destroyed in the second half by a superior outfit. John Hackworth will presumably have given them a kick up the backside after their second half performance and they'll be an injured beast come kick off.

Last time out against Sporting KC, for the first 40 minutes they were vastly superior in many ways. Their 4-2-3-1 formation pressed high allowing the opposition little time on the ball and in attack they countered with many direct balls over the top of the Sporting defense for Le Toux to use his physicality to create his own openings.

It worked up until Graham Zusi scored off a rebound and after that Sporting settled down and were much calmer on the ball, picking off the Union's defense in the second half as they tired after their frenetic start. 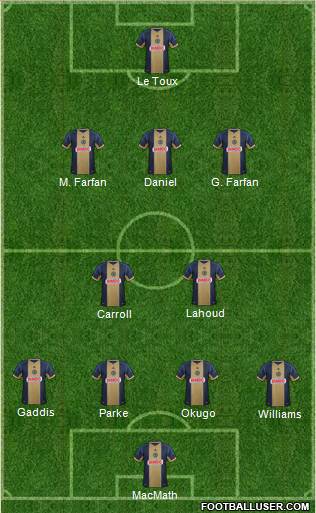 I don't foresee many, if any, changes from the Union for Saturday's game. Luckily for them, they aren't suffering anywhere near the injury disruption that the Rapids have had coming into the season and picked up no injury worries last weekend.

MacMath in goal didn't put in the greatest performance against SKC and the last few times I've seen him he has looked a good shot stopper but not a safe pair of hands. If we can muster some decent efforts on goal this weekend, the ball may just pop loose and one of the front three for the Rapids needs to be sniffing around to put it away.

At the back, I think Philly can be caught out. They've got great athleticism in the fullback slots in Raymon Gaddis and Sheanon Williams but they tend to wander forward leaving huge gaps out wide on the counter attack in which we may be able to have some joy. Parke and Okugo isn't the quickest centre back pairing and no matter who Oscar Pareja picks out of Deshorn Brown and Danny Mwanga, they will most likely have the beating of them onto any balls in behind.

In the centre of the park, the Union are pretty solid. Brian Carroll gets around and does his job without much fanfare, breaking up play and setting up attacks and the same goes for Michael Lahoud, really.

The attacking midfield trio that will likely consist again of the Farfan brothers, Michael Farfan and Gabriel Farfan, along with the rangy Tobagonian Keon Daniel. Bar the odd moment from Michael Farfan, these three don't really have much attacking flair going for them but what they do have is a penchant for causing trouble. They'll pressure high, looking for sloppy play or a misplaced ball and they'll get in the box at any opportunity meaning that both Hendry Thomas and presumably Pablo Mastroeni will have to be switched on at all times.

Up front, Le Toux is somewhat an enigma. Some days he will bury any half chance he gets. Others he will look slow and like he wouldn't be able to score in a month of Sundays. Against Sporting KC he showed flashes of both. He tucked away his goal but wasted a few other chances including a sitter from around six yards out. If he is on his game though, like during his last spell in Philly, then he may cause a lot of problems for the Rapids' back line.

As a whole, they are a pretty industrious outfit. Gaddis, if he improves defensively, has all the attributes to be a top, top left-back. And Le Toux can score goals if given the chance. However, they don't pose the dangers going forward that FC Dallas posed (and we successfully nullified). The confidence we showed moving the ball around last week could really work in our favour as it was only when Sporting KC looked nervous, giving the ball away often, did Philly threaten on the counter attack.

But as I said, it isn't going to be easy. The rookies may feel some pressure on home soil for the first time and the Union will be wanting to avenge last weekend's defeat. If we can move the ball forward slightly quicker than last weekend without compromising our possession-based attacking play then we could get some joy out of our wide men in the 4-3-3. If we allow Philly to get the back into Le Toux and don't pick up the runs out of the midfield from the trio of attacking midfielders then there may be some problems. Score first and I think we can emerge victorious.

Pablo Mastroeni Goes Down As Rapids Lose 2-1 To Union