Colorado Rapids welcome Portland Timbers to Dick's Sporting Goods Park on Saturday with both teams still looking for their first win of the season. Here's a look at how to beat the Timbers.

Two of the four teams without a win so far this season meet up at DSGP on Saturday afternoon as Colorado Rapids welcome Portland Timbers. Portland, this winter, have been one of a number of MLS clubs with a new manager and a seriously high turnover of players. No less than 16 have left Jeld-Wen Field with 13 in as replacements. Those incoming players include Argentinian midfield maestro, Diego Valeri, adding much needed flair and creativity to a workmanlike Timbers midfield as well as centreback Mickael Silvestre whose purpose is to add some international experience to last year's leaky defence.

It hasn't been the start that Caleb Porter would have wanted so far with the Timbers picking up two points of their first three games with the defence, much like the Rapids, contributing to their own downfall. Two howlers by Silvestre on opening day against New York Red Bulls saw to it that their second half fightback would only win them a point rather than all three. Defensive lapses cost them against Montreal Impact too but an improved performance on the road at Seattle Sounders in which they were unlucky to not take more out of the game may boost their confidence a little after a tough opening few weeks.

The team that Porter has put together revolves around the front three, typically consisting of Valeri, Darlington Nagbe and Ryan Johnson as the central striker. These three are charged with much of the attacking work along with the support of the fullbacks who tend to cover a lot of ground over the 90 minutes. Valeri is their standout guy though and the former Lanus playmaker has already put some impressive performances so far this season including his Goal of the Week on opening weekend.

Last time out, Portland struggled to break down Seattle's defence for long periods despite having more of the ball and more shots on goal than their opposition and in the end had to settle for a late equaliser, another Goal of the Week winner, this time courtesy of Rodney Wallace. 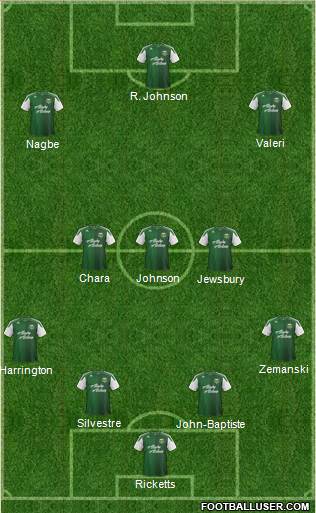 As the Timbers come into Saturday's game off the back of a bye week, it theoretically should work in their favour giving them more time to study and prepare for the Rapids. However, so early in the season it could have the opposite effect by slowing their momentum that was beginning to be built up following their performance against the Sounders.

Typically, Porter sets his team up in a 4-3-3 formation which likes to possess the ball and stretch the pitch to create gaps through the middle. The fullbacks bomb forward when the team has the ball to support the wide guys in the front three, whipping in crosses aimed at Ryan Johnson who is useful in the air. In the centre of midfield, all three are tasked with getting from box to box and filling in for each other when they go forward. Jack Jewsbury, Diego Chara and Will Johnson are all in the industrious mould of midfielders who, although aren't blessed with the technical skills of the likes of Valeri or Nagbe, do have the fitness and stamina to keep going for the whole 90 minutes.

Coming into the weekend, in complete contrast to the Rapids who are losing guys left, right and centre, Portland have no new injury worries. They lost Bright Dike for the whole season before a ball had been kicked and Sal Zizzo picked up another knee injury a few weeks ago. David Horst is back on the road to recovery for the Timbers after playing 45 minutes in a behind-closed-doors game indicating he could play a role on Saturday.

Porter won't be forced into any changes in his line up this weekend and it isn't expected that he will tinker too much with the team that faced off against Seattle last time out. One of the changes that Porter may look to make would be to drop Jack Jewsbury for Khalif Alhassan and push him into the right-wing spot with Valeri in the hole behind the front three. However I see this as pretty unlikely as Porter tends to be more conservative on the road, favouring packing out the midfield with three rather than two more defensive minded midfielders. Another may be whether he sticks with Ben Zemanski at right-back or brings back Ryan Miller who was dropped for the game in Seattle.

To beat this Timbers side is going to be pretty difficult if we don't win the battle for the ball in the midfield. When they have the ball, they are very useful in creating chances and this means we will need to keep the ball well in midfield but also play with some purpose going forward rather than purely playing keep-ball. Although it has probably been forced due to Pablo Mastroeni's injury, it will be useful to play Nick LaBrocca in this game as his composure on the ball will be integral in keeping the Rapids ticking over on Saturday as well as setting up attacks.

Stopping Portland's attack hinges on crowding Valeri out of the game. Montreal Impact did so successfully in their victory at Jeld-Wen Field. Every time he got the ball he had at least two, and sometimes three, Montreal players round him stemming his creativity and not allowing him to dictate the tempo. This is the key for Saturday and will be integral if Colorado want to get their first victory of the season. Hendry Thomas will let him know that he's in a game and, if Valeri plays more centrally, it will be his job to shackle him.

Going forward for the Rapids, it will be useful to put pressure on the centreback pairing as they have both been shown that they can make mistakes. Andrew John-Baptiste in particular could be targeted. The young defender tends to struggle with his positioning and although he has the pace to make up for it usually, he will be up against DeShorn Brown this time out and we all know how quick he is. In fact, their whole backline is pretty shaky and could give up more chances than we're used to getting. However, that's all well and good but the Rapids need to put them away as it is more likely than not that Portland will score with their attacking prowess. If the Timbers attack can be tamed then the Rapids will certainly be in with a shout as their backline will no doubt give up a few chances for DeShorn Brown and co. to snap up.