Colorado Rapids head to the Home Depot Center on Saturday to face off against Bruce Arena's Los Angeles Galaxy with the Rapids still looking for their first three points of the season. Here's how to beat the MLS Cup champions on their own pitch.

Current MLS Cup champions, Los Angeles Galaxy, are next up for Colorado Rapids on Saturday as they bid for their first win of the season.

There has been much upheaval, albeit not on the Rapids scale, in Los Angeles this off season with a number of the central players in last year's MLS Cup winning team leaving to pastures new including designated player David Beckham and Swedish international Christian Wilhelmsson, not to mention Edson Buddle to our Rapids.

To fill the goalkeeping spot which has been the problem for the Galaxy for a few years now, they acquired veteran goalkeeper and a safe pair of hands in Carlo Cudicini from Tottenham Hotspur. Cudicini is a definite upgrade on Josh Saunders and will prove his worth over the season after a successful career in Europe.

LA will be certainly looking for a third MLS Cup in a row this year but from what I've seen so far, it could prove a step too far this time. So far this season they have got four points out of the two games they've played. On paper, that doesn't look like a bad start at all but it masks some of the truths behind how they have played. Although they may have won by a pretty convincing scoreline on opening day, the Fire put in one of the worst performances I've seen from an MLS team in years. LA barely needed to move out of first gear and they waltzed to a 4-0 victory.

Last time out, the Galaxy struggled to a point against a very physical Chivas USA team under the command of their enigmatic new head coach José Luis Sanchéz Solá. Chivas' physical approach worked a treat against the technically gifted, but rather soft, LA midfield shutting out both Marcelo Sarvas and Juninho from controlling the tempo of the game. Had it not been for an absolute shocking refereeing decision by Ricardo Salazar, Chivas USA may well have been able to get more from the game, instead they had to sit back and play a very conservative style.

The Rapids had to settle for their first point of the season last weekend against Real Salt Lake after squandering numerous chances to put the game to bed before Alvaro Saborio equalised late on. It was a much improved performance on the one we saw against Philadelphia Union with more incisive forward play laying on numerous clear cut chances for DeShorn Brown.

Bruce Arena favours a typical attacking 4-4-2 formation built on a solid centreback pairing, a creative middle of the park and the quality finishing of Robbie Keane. However, two of the main pieces of the Galaxy jigsaw, Robbie Keane and Omar Gonzalez, will be missing through international duty on Saturday giving the Rapids a welcome confidence boost when entering the home of the reigning champions. Leonardo will most likely come in for Gonzalez with Jack McBean probably being rewarded with his first start of the season after his goal against Chivas last weekend.

Another option though, if Arena doesn't want to go with the young striker from the off would be to shift Mike Magee up along Jose Villarreal and start Michael Stephens on the right. Either way, the Rapids will be delighted to not have to face Republic of Ireland and former Tottenham Hotspurs, Inter Milan and Liverpool striker, Robbie Keane, who on his day could probably beat the Rapids singlehandedly. 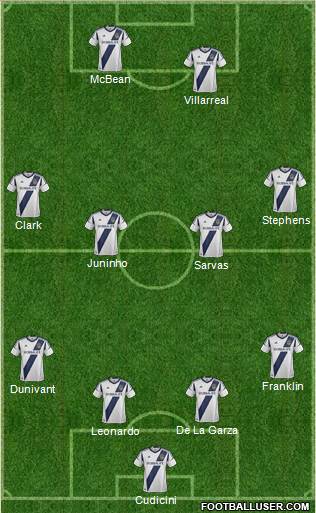 With Leonardo starting at centreback, the Galaxy's backline looks considerably weaker and could be the area through which the Rapids could have most joy. Leonardo is an error-prone guy and the constant pressure that Brown puts on opposing defences, as we saw against RSL, could once again prove fruitful for Colorado going forward.

The key, as always with the way Oscar Pareja sets the boys up to play, is to grab hold of the centre of midfield. With our three man midfield, we should be able to crowd out Juninho and Sarvas, stopping their creativity and overrunning them on attack. Also, Hendry Thomas will play an important role this weekend - he needs to let Sarvas and Juninho know he's there early on and they aren't the best when the game is physical in the middle of the park as was seen last weekend.

At full back, Marvell Wynne and Brian Mullan need to be fully aware of both Todd Dunivant and Sean Franklin's attacking ability and not stray too far forward as LA has the potential to do serious damage down the wings. It is also an area where I think the Rapids could really hurt the Galaxy, especially if Atiba Harris can pull onto Dunivant on any crosses coming in from the left side and use his height and strength to his advantage. This is where Harris struggles. He needs to play to his strengths. Just accept the fact that he isn't the best technically so he should use the physical attributes that he has, namely his strength, and cause mayhem in the LA backline because I can assure you, none of those defenders are that keen to play against someone of his physical stature.

So what, in a nutshell, do the Rapids have to do to grab a win on Saturday? Well firstly, shut down the centre of midfield - rough them up, overcrowd them and generally do everything to stop them from playing how they want to play. Secondly, get the ball forward quickly, preferably in behind the backline so Brown can run onto the through balls using his blistering pace. And finally, we need to finish our chances. Last week Brown could've had a hat-trick and if he has the same number of chances this week I expect him to take more than one. We need to take our chances when playing on the road, especially against teams of LA's quality.

It's always going to be tough on the road in LA but it is doable and although the Rapids haven't won so far, I still have a lot of confidence that we could well get a result come Saturday evening.