It's the big one. The Rapids face Real Salt Lake off the back of a second defeat in two looking to breathe some life into the new campaign that has so far started with a stutter.

This Saturday takes Colorado Rapids to Sandy, Utah to face off against their biggest rivals, Real Salt Lake in what is the most eagerly awaited fixture of the Rapids soccer calendar.

Following the defeat last weekend in the home opener against Philadelphia Union, the Rapids remain without a point from their first two matches. This has increased the importance of Saturday's fixture for Oscar Pareja and the Rapids squad as there is a need to get points in the bag to kick-start a slow opening. As games pass by without a win, the pressure builds and in a young team such as this one, it is important to stop the rot quickly.

Last time out, Real Salt Lake continued their dismal run of form when playing DC United at RFK Stadium losing out 1-0 in a drab affair. They didn't show a repeat of their opening day victory and shut out at (an injury-depleted) San Jose Earthquakes and will be looking to bounce back against the Rapids in their home opener at Rio Tinto Stadium.

Against DC, RSL trotted out a diamond 4-1-2-1-2 formation with Alvaro Saborio and Robbie Findley leading the line, two well-known quantities in this league with the prodigious talent of Luis Gil playing behind them in the hole. The new look RSL backline does not look as solid as in previous years with the likes of Jamison Olave no longer at the club and Nat Borchers and Chris Wingert unavailable for selection. 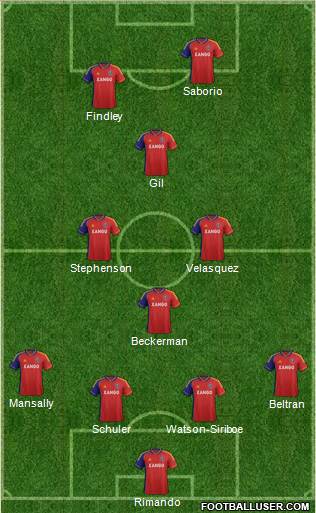 In terms of team line-up on Saturday for RSL, the only forced change from last week's team will be at left-back with Kenny Mansally suspended following his head-butt on Perry Kitchen. With no natural replacement, Lovel Palmer or Rich Balchan may be called upon to fill in, adding to the already weakened back four. However, Kreis' best option may be to switch Tony Beltran to leftback and put Lovel Palmer in on the right of the defence.

If Jason Kreis wishes to refresh a forward line that could only muster four shots on goal in D.C., they could turn to the frighteningly quick Joao Plata whose ability to glide past a man is matched only by his ability to disappear in the tough games.

The key area of the park for the Rapids to focus their attacks will be down the wings, particularly the Rapids' right side, to put pressure on Mansally's replacement. Although Pareja may decide to stick with Harris down the right, a better option could be either to shift DeShorn Brown wide and put Edson Buddle (if fit) or Danny Mwanga through the middle to provide more of a goal threat than was seen from Brown in the first two games.

Don't get me wrong - Brown has shown flashes of his potential but I feel by pulling him out wide, he will have more chances to get in behind the backline as the focus of the two centre-backs will be the central striker therefore leaving Brown 1-on-1.

The two centre-backs, Kwame Watson-Siriboe and Chris Schuler, both looked shaky against D.C. and the Quakes and that seems to be an area through which the Rapids may have the most joy going forward. They're both not the best on the ball so pressuring high could result in RSL turning the ball over or being forced into a mistake.

A combative midfield selection by Pareja would be best suited to neutralise the threats that the RSL midfield pose. Hendry Thomas will be tasked with the job of shackling Luis Gil and therefore the other two midfielders will have to be aware of the dangers posed by Sebastian Velasquez and Khari Stephenson. This is without even mentioning RSL captain and former Rapid, Kyle Beckerman, the lynchpin in midfield who not only protects the backline but poses a threat from long range going forward. Dillon Powers and Nick LaBrocca are going to have their work cut out in keeping a lid on the RSL midfield if Pablo Mastroeni's hamstring injury keeps him out of the game as is currently looking like the case.

The key for the Rapids, though, is to cut out the silly mistakes that have cost them in the first two games so far this season. Poor judgements, positioning and slack defending have been the cause of the three goals conceded so far this campaign and if they are repeated, Saborio will punish them. Also, using possession more wisely than in previous games is vitally important too as RSL will flood the midfield and therefore getting the ball forward more quickly to the front three may prove fruitful.

It's going to be a battle on Saturday in Sandy and a win could really help the Rapids push on to defy their preseason predictions. The first few games of the season are always up in the air, line-ups may change as teams try to find their most effective formation and there is always the potential for teams to catch their opponents unawares.

However this game isn't one of them. Both know the other very well and will believe that they have enough quality to come out victorious. The healthy following that the Rapids will have at the Rio Tinto could prove crucial, giving that extra edge to a team that has struggled to impose themselves going forward in games. If we can cut out the mistakes and produce more goalscoring opportunities up top then we could well emerge with all three points come Saturday evening.