USMNT vs. Costa Rica: It Took An Hour To Sell The Tickets Out!

It took only an hour for every ticket to the game against Costa Rica on March 22nd to sell out. Nice.

Share All sharing options for: USMNT vs. Costa Rica: It Took An Hour To Sell The Tickets Out!

Edit: US Soccer has made it official on twitter, we have a sellout!

Only an hour and a half or so ago, I posted that the ticket sales for the USMNT game against Costa Rica were racing along at record speed, and that there might not be any tickets left soon at the rate they were going. A big chunk had been removed thanks to the 2,000 American Outlaws tickets and the Rapids Season Ticket Holders pre-sale, but there were still probably about 12,000 or so left to sell out the place.

Well, guess what happened when I just went onto the Ticket Horse sales page for that game and asked for a single ticket to whatever the best seats available were? 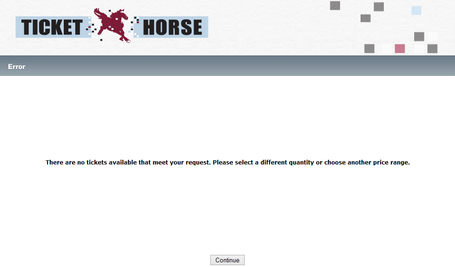 Nice. One would assume that either means that the stadium is sold out or is at least close enough that they had to stop selling everything but the premium stuff. That took what, three hours? Three and a half? Well done, everyone.