Strategically speaking does playing for a tie when trying to position your team for a playoff chance make tactical sense for some games?

Share All sharing options for: The Daily Wave: Rapids Learn To (Re)Draw?

"A tie game is like kissing your sister." - JC Humes

The man this quote was attributed to, JC Humes, was a former presidential speechwriter (he was credited with authoring the text on the Apollo 11 lunar plaque). I do not know the reason for the quote, but it seems completely appropriate when related to soccer.

For my first article on Burgundy Wave, I decided to lead off with the topic about ties or draws (as our English brethren like to call a tie). The tie is the main reason soccer is disliked by most sport's talking heads. Yet it is a source of overlooked strategic importance and shows the real depth in managing through a 34 game, 9 month long schedule that has become the MLS Season.

At this point last year, with 30 games played, the Rapids were 9-18-3 and mired near the bottom of the Western Conference with a lowly 30 points. This year the Rapids are 12-9-9, competing with the top teams, gearing itself for a possible playoff run, and sitting in 5th place with 45 points. Clearly this is an improvement with 9 of those 15 points coming from wins and 6 additional points from ties. Those 3 extra wins are huge but this year the Rapids have also scraped by with 6 more ties and thus earned a point in 6 matches in which they were denied any points last year.

Has something changed in this year’s game management? The tie or draw entered the league in 2000. Since then, 13 years, the Rapids have averaged 8 draws a year. Over this same period they have averaged 40 points, so approximately 19% of their point totals have come from "kissing their sister." In fact since the league allowed draws, the league overall has averaged 8 draws per season as well. As an aside (and a jab at those sport’s talking heads), only quarter of all games since 2000 have resulted in a tie (688 draws in 2,673 games played).

So while the tie is not as ubiquitous as some think, its existence does play a role. Below is a graph that shows the percentage of points coming from ties versus team’s final place. As is somewhat expected, the better team you are the less you tie. But in today's league, parity being what it is, the difference of only a couple of points can get you into the playoffs. And based on last couple of MLS Cup winners, season point leaders rarely find themselves in the big game so just getting in makes these few points significant. 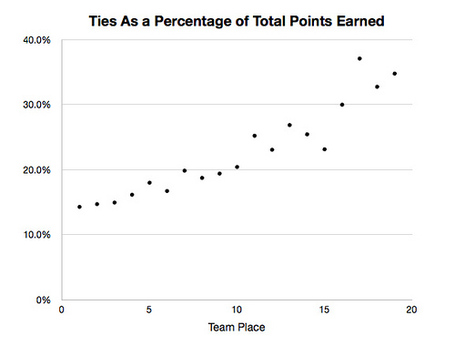 Strategically speaking then, overall the long haul of the season, playing for a tie when trying to position your team for a playoff chance is tactically advantageous for some games. Picking games when playing for the tie versus trying for the full 3 points might be more important. Gary Smith, Rapids manager from 2009 – 2011, was the master in securing these one pointers. In his three years he managed to secure 10, 10, and 13 ties in each of those seasons collecting almost of quarter of points through the tie. Compare this to Oscar Pareja’s first year as manager where he only secured 4 ties (11%). So while Smith’s tactical management was revered (and the fact he helped win our only Cup), Pareja’s attacking style last year was criticized. It is my contention that Pareja’s style ignored the almighty tie. So what has Pareja learned this year? In review, the ties this year include:

Frustrating to think in 5 of these games, Rapids held a lead into the second half. In addition the game at San Jose and at Seattle, Rapids clearly played for the point on the road versus trying to take all three. In the home ties, Pareja tried to score late with the addition of a more offensive minded player (although Mwanga as an offensive power is clearly something to debate). Of course in hindsight there were games, like in Montreal (Rapids won 4-3), that we probably should have loss or tied and not taken three points.

While this article is tailored to the Rapids, I’d be remiss if I didn’t mention how important the tie has been to the turnaround in Portland this year. In 2012, the Timbers finished with a 8-16-10 year in second to last place with 34 points. They find themselves 3rd this year with a 12-5-13 record and 49 points. Any team that reduces their zero point games, and maximizes their points tend to do better. The graph below shows points earned per game and final team place. 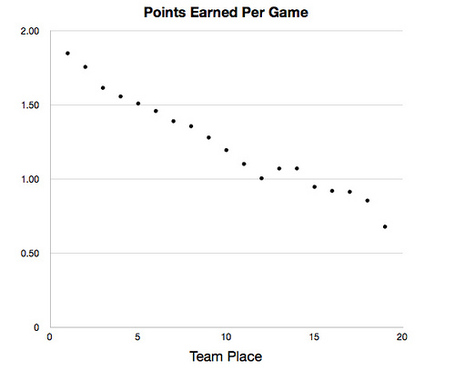 Rapids have played at a healthy 1.5 points per game this year. It is my contention that Pareja’s management this year has matured to the point where he understands the importance of earning points against earning nothing. From a fan’s perspective I want the win but over a 34 game schedule, I understand the importance of packing it in from time to time. I would maintain then that some of the turnaround for this season may be attributed to kissing the proverbial sister with the hopes of getting into the playoffs so there is a chance to kiss the Cup.