Share All sharing options for: FasTracks Delays Should Give RTD Plenty Of Time To Get Rail To DSGP (But They Won't)

RTD's FasTracks program began in 2004 when they first announced the slight tax hike that would be funding hundreds of new miles of Light Rail and Bus service around the Denver Metro area and even beyond, stretching out to places like Longmont in its completion. The actual planning didn't start until 2006, at which point we knew that we would be getting a stadium built for the Colorado Rapids up at 60th and Quebec in Commerce City.

Well weren't we in luck then? They had announced that there would be a North Line that would go right through Commerce City which brought some hopes that there would be rail to DSGP at some point in the future. People could get to Invesco Field via the Light Rail, after all, and in fact that's how I got to most Rapids games that I went to back in the early to mid 2000's.

No luck for us in that regard. They announced the stops that would be available later on and though I personally kept waiting for them to change their minds as attendance began to grow at DSGP, we never got it. It looked like it would go along as planned, right up until the recession hit and FasTracks began to suffer. The slowdowns have continued to get worse, to the point where it looks like there won't be any new light rail lines, other than the West line opening in 2013, for up to 30 years. The closest they're coming to opening anything is the first stops of some lines five years from now:

In fact, only the first segment of the North Line — between Denver Union Station and the National Western Stock Show — is on track to be finished by 2017.

So wait, doesn't that leave RTD plenty of time to get this figured out? They don't seem interested.

Now, technically it is possible to get to DSGP via RTD busses at the moment, though most people probably don't know that. I've taken the trek many times before, all you have to do is take any bus that goes to the Stapleton Transfer Center and then hop on the 88, which will drop you at 52nd and Quebec. It's about a mile walk to the stadium at that point and it takes a few hours, which might as well be nothing at all. I can't see anyone but the most hardcore of Rapids fans taking that trek, which is why getting a Light Rail out there has always been something I've wanted to see.

Take a look at the map of the planned Light Rail lines that are going to be coming up whenever the hell everything is completed, and you'll see that they're essentially circle-strafing Dick's Sporting Goods Park. Three Light Rail lines are in the picture, the North and East corridors in gold and the I-225 in blue -- DSGP is circled in red: 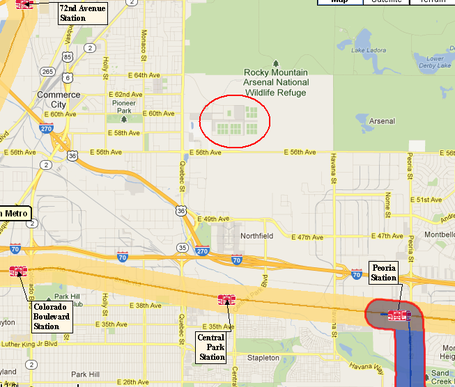 Three lines going within striking distance of DSGP, but all landing several miles away. The I-225 line in particular would seem to be the easiest to push up, as it would go through the mostly uninhabited grasslands area that surrounds the DSGP complex but still stopping short of going into the Rocky Mountain Arsenal.

At this point in time, the best solution that I could see happening would be to have an RTD mandated bus shuttle from perhaps the 72nd Ave. station to DSGP, similar to what the Chicago Fire have from the Midway stop of their Light Rail/Subway system to get people to out-of-the-way Toyota Park. Of course, there's been no word on anything like that being planned either -- they've never had any sort of 'Rapids Ride' the same way they've had Broncos and Rockies rides -- so I don't see it happening.

I'm not a city planner by any means -- I can't even plan a paragraph, as you've no doubt seen around here -- so I'm not good at these things. I don't have any infrastructure maps of the Commerce City area that DSGP is in, but even the most casual observer can see that there isn't exactly a booming housing market or commercial zone (for you Sim City fans) in the area. I would think that there would be a way to snake one extra stop out at least within a stone's throw of the Park, similar to the Sports Authority Field stop on the C Line that requires a short walk to get over to see the Broncos and Outlaws.

Even if they can't figure it out in a week, they still have about 30 years to wait at the rate that they're going.