Because we seriously can't let a game go by without reminding you how steady Hendry Thomas' passing numbers are.

Share All sharing options for: Yet Another Hendry Thomas Passing Numbers Update

I've been gushing about the steadiness that Hendry Thomas puts into the Colorado Rapids midfield since the guy showed up and had two great games in a row against Portland. We're now a couple more games into his Rapids career, but he's shown no sign of slowing down his superb passing rates. After a perfect passing game against the Galaxy, he had a slight downfall -- how couldn't you if you were all for all the game before? -- against the Whitecaps, but still looked solid.

This time around, he had a 38/6 passing ratio, here's the distribution he provided. Remember, red dots are unsuccessful passes, green are successful: 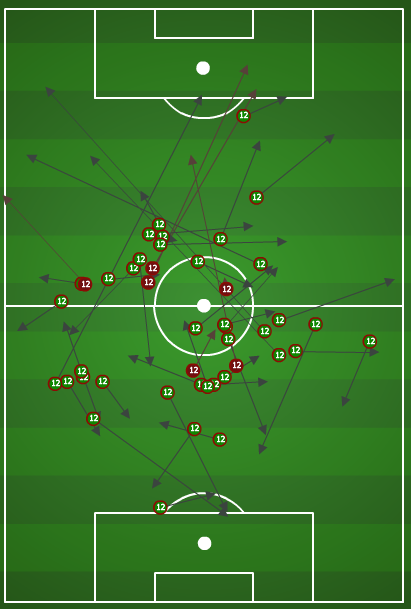 One thing to note is that none of the missed passes were garden variety ground passes. All of them were head passes, launches, chips etc. And a lot of them were going far forward into the attack, which has never been a strength of Hendry.

Keep in mind, that was by far his worst game so far as a Rapid. If that's going to be his benchmark for failure, I'm certainly not going to complain. His numbers now show a 190/15 passing ratio of successful/unsuccessful on the season, or about a 92% successful conversion rate. To give you some idea of how good that is, the team as a whole has been hovering in the high 70's and low 80's most of the time this season. Injecting a 90+% passer into the mix is just what the doctor ordered, and we've seen it steady the play a lot of the time already.

I think I'm figuring the more articles I write about him being awesome, the faster the Rapids will snap him up on a long term contract. Lord knows the guy has already earned what he's made in the short one for the end of the 2012 season he got.

Rapids vs. Whitecaps - Colorado Comes Back Late In 2-2 Draw