Hendry Thomas might have had two of the best games I've ever seen from the Colorado Rapids newcomer just starting out with both the team and the league. The numbers he had in the passing game were staggering against the Portland Timbers -- 110 successful passes to nine unsuccessful passes. Those numbers are practically unsustainable, especially right after joining a new team with supposed fitness issues!

Then again, those two games came against the Timbers, one of the worst teams in the league, right in the basement with Colorado. Their midfield could probably get beat up by some of the sturdier holding midfielders in the NASL. Surely, he couldn't keep up that sort of passing accuracy up against a team with a midfield as good as LA's, right?

Well, let's look below the jump to find out just how he did against the Galaxy. Be warned though, the numbers may surprise you... they certainly beat the tar out of me when I first saw them. 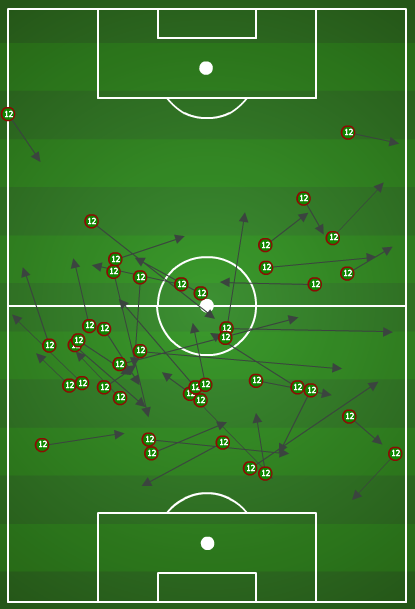 That is Hendry Thomas' distribution from the Galaxy game. Green dots represent successful passes, red dots represent unsuccessful ones. You aren't misreading that. There is not a single red dot on there -- Thomas completed every single pass of the 42 he attempted against Los Angeles and played some solid defensive ball to boot.

That moves his passing numbers since he joined the team up to a 152/9 successful to unsuccessful passing rate. That is absolutely mind-boggling.

All the counter attacks that the Galaxy launched, all the terrible giveaways in the midfield that were stolen by Juninho and the others? Hendry was rarely if ever at fault for any of it. He was just sitting there and providing solid, constant distribution throughout the midfield -- just what the Rapids have needed so often and not gotten out of Jeff Larentowicz this year. (He also took three shots, all of which missed. I know, you're all shocked that someone missed shots on this team!)

Personally, I'm an easy guy to sell on something so this might be a bit too soon, but I am sold on Mr. Thomas. Sign him up right away, Colorado. He's already started to show that he is the type of guy you can build a dominant MLS midfield around.