"Omar Cummings is the Fernando Torres of MLS."

Share All sharing options for: "Omar Cummings is the Fernando Torres of MLS."

I never thought I'd write it, but there it is. It's one of the most ridiculous comparisons in the world to make, but I kept finding myself saying it in the Dallas game. Especially in that howler of a miss after beating Kevin Hartman 1v1. You can find a video of it right here if you are into that kind of thing. Right after seeing that I couldn't help but think of El Nino, and his disappointing first years as a Chelsea player--especially when considering the glory days he had at Liverpool. I uttered one of the most idiotic phrases I've ever uttered:

"Omar Cummings is the Fernando Torres of the MLS"

It was an instinctive reaction, and it would have passed completely had I not just been curious. Why did I think that? Is it just because I'm an idiot? Or is there actually something to the comparison?

Full disclosure, as far as the EPL goes, I'm a Chelsea FC supporter. Full disclosure over. Feel free to stop reading and go immediately to the comments to call me names that end with "wat" and "unt".

And that got me thinking about Liverpool, which I rarely try to do, and about the style of football played there when Torres was at his height, when players like Xabi Alonso and Javier Mascherano ruled the empty bucket midfield and played most of their offense through the wings or Steven Gerrard hoping that they had a forward of equal measure to the kind of ball they played...

In fact, it sounds a lot like the Rapids in 2010, although of course Liverpool played against better competition with a much higher budget for some of the best players in the world, but let's take all things being equal. Let's say Torres in the Premier League is like Omar Cummings in Major League Soccer. Let's say both these gentlemen are equal measure to their respective leagues. Clearly both have proven themselves, but have both recently found themselves on the bad end of a poor run of form which seems to last forever--leaving fans all wondering "Hey, where did the old guy go?"

Here's why, on a bare numbers level, the comparison makes sense:

But at Chelsea? His first year he only got a few shots in, so to be fair we're really only going to be looking at the ratio. 1 goal to 9 shots on goal and 22 shots overall. That's terrible. The next year, 2011-2012 was supposed to be his big one, the first one a fluke: 6 goals, 20 shots on goal, and 66 shots overall. Fallen a pretty big way from his his nearly-one-third-of-the-shots-he-takes-he-scores. It's now down to only a tenth of the time.

Omar Cummings has had a different story, but a similar result. Omar hasn't been traded, but he has gone through a similar change like Fernando Torres: formerly playing in a system that favored a particular kind of striker (Torres being a "complete" or "lone" forward and Cummings being more of the speedy goal poacher) he now plays in one that favors a different sort of striker, one that makes different demands, and he's not faring well at it.

In both cases, it's interesting to note, both had a lapse in form prior to the respective changes. Torres was falling off his form before the Chelsea transfer, and Cummings' lapse in form can be traced back to the ankle injury in 2011 he suffered at the hands of Lowel Palmer. Let's look at that, then.

In the 2010 Season, Cummings had 14 goals out of 37 shots on goal, with 76 shots taken overall. Torres is the better striker, to be sure, but the ratio is almost the same. Almost one third of Omar's shots became goals. Almost half of them were shots on goal, and almost half of those, if he put it on frame, became goals. With this kind of magic striker ratio, it's no wonder he still gets mentioned as a top striker in the league and a force that everyone fears along with Conor Casey.

Look at what happend in 2011, though. He only scored 3 goals, out of 10 shots on goal, and 34 shots taken overall. Only a tenth down from a third. Wow. Who does that sound... pretty much exactly like?

No, don't look back at the article, I'll help you: 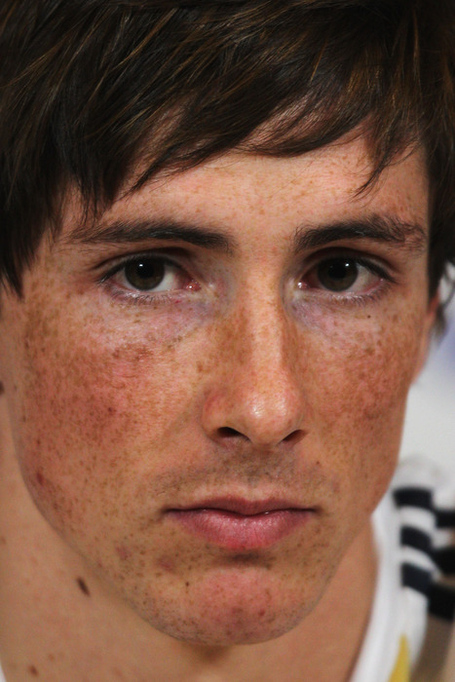 Yeah, that guy. Staring into your soul. Let that haunt your nightmares.

And this year hasn't been kind on Omar either, though he's doing pretty much everything BUT scoring goals (hence why his Castrol Index rating is consistently high) he's still not up to his former form--though I'd say he's doing somewhat better than 2011. He has scored 5 goals out of 18 shots on goal, and 46 shots overall. That's better, but not much. He's still at almost a tenth. His production is up, but the ratio remains the same. Much the same as Fernando Torres. His production was up in 2011-2012, but his ratio remained at nearly a tenth of his shots becoming goals, as opposed to that magic third.

And it has lead to a lot of the same stuff. Manager Oscar Pareja has gone to the media to talk about Omar's poor run of form, and even Club President Tim Hinchey has voiced his displeasure with a guy who you couldn't stop from scoring in 2010. Is that what he needs? Maybe. A good benching might work, but did it work at Chelsea?

No. I'd argue, it hasn't worked. Torres' league performance improved, but the ratio didn't get nearly to where it was when he played for Liverpool. Both Chelsea and the Rapids would be insane to change their playing style to fit their out of form strikers as well. That would be tossing the baby out with the bathwater. And while there are always rumors of deals surrounding both strikers, I've not heard concrete details about either one--and both clubs are loathe to let them go.

So, Rapids fans, Chelsea fans... what do you do? I'll put the question to you.

What do you do with a striker who has demonstrated greatness, but no longer is performing?

How would you handle it?