And Now for Something Completely Different: Changing the game to get a goal in Seattle v Colorado

Share All sharing options for: And Now for Something Completely Different: Changing the game to get a goal in Seattle v Colorado

Oh, and Steve Zakuani running in a field. This warrants almost half of the highlight reel.

Put briefly: For most of the game, Colorado was attempting some kind of "zipper" offense, where they were trying to weave the ball up the middle. Kind of like the way a zipper locks together. The problem was that Seattle was having none of that noise, and marked a major part of the "zipper", Martin Rivero, out of the game. Either Osvaldo Alonso or Adam Johansson must have been told to mind him because there was nary a time the 22 year old Argentine play-maker wasn't being crotch bumped by one of those two.

Seriously, I wish I had the tape. There's crotch bumping. Then, if you play it in slow motion, it looks like Adam Johansson is trying to re-enact a scene that he read in this cool new book he picked up.

Unfortunately for Martin, I don't believe "50 Shades of Grey" is available en Espanol just yet, so he was understandably benighted.

Anyway, what I DO have tape of is when the Rapids got fed up with trying the "Zipper" and changed the point of attack for great effect.

OH, and I also show why Edu nearly screwed us completely. Seriously, it could have been 2-0 if the ref had caught this one. Joint me after the jump.

So here's the situation, paco: You've just been scored on by the fishiest fish who ever swam the pitch: Alvaro "Floppo" Fernandez, and Eddie "I Want to Be Mario Balotelli" Johnson. 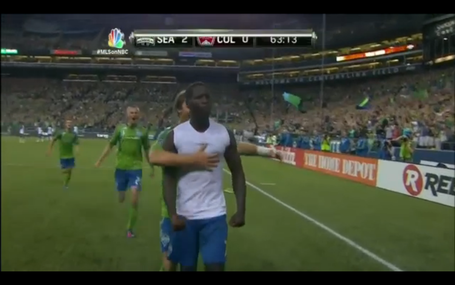 Being a general annoyance who happens to be good at kicking a ball does not a Mario Balotelli make. You need money for that. And fireworks. And gobs of wasted talent.

Anyway. That's what you've got served up to you. Your generic run of the mill shit sandwich. Now, are you going to try what you've been trying the whole game? Or will you leave the zipper up?

Ball gets recovered by Wynne who (playing really high up the pitch) gives it to the Ginger. 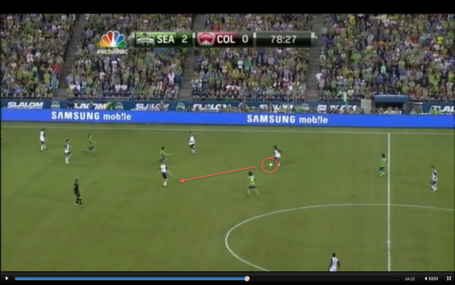 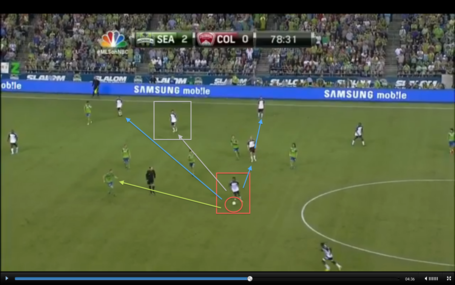 Now Castrillon has to make a choice. Does he run at the defenders, barrel through that balding goon Kevin Stott, and try to get the ball through them (green) and do that zipper thing? Does he pass back to Jeff (blue) and then through to Hunter Freeman (blue) to reposition himself so that they can do that zipper thing? Or maybe Mullan (blue) would be a good option? Give Seattle something to boo about. Does he pass to Rivero (highlighted in Grey, obviously, but only one shade of it) to come into play so that he can do the zipper thing?

He passes out wide to Zapata who is in acres of space. Seriously. Look at all that space (highlighted in red circles, Rivero highlighted in Grey). What could they have been thinking? I even added a few speech bubbles to show how I think the whole thing went down. (Click the picture to enlarge) 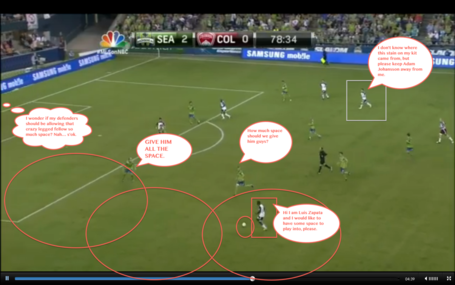 Right. Fuck the zipper thing, we're going route one over the top. 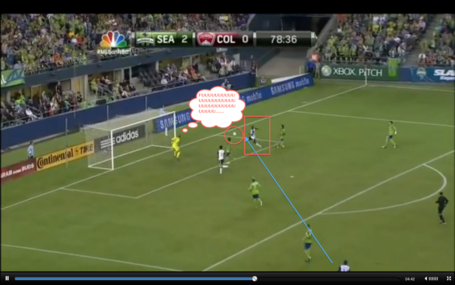 And that's just what we did. Omar Cummings showing fantastic skill and touch to one time it into the net. Pretty glorious, right there. That goal brought me right back into the game, and the Rapids as a whole as well. Then we got the second goal called back for offside. Which was funny to me, at least in part, because Edu could have gotten our first goal called offside too. Look at this. 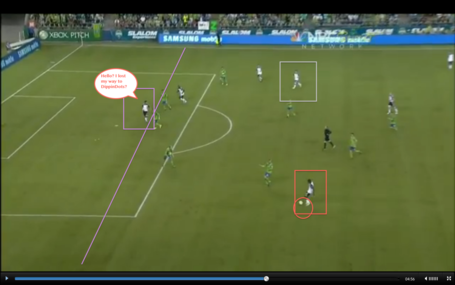 Yup. There's Edu. Standing offside like some ignorant wad who got lost on his way to finding some Dippin Dots for his kids. We all know that guy, we've all been that guy. Martin, again, highlighted in Grey.

Just saying, in my generally conspiratorial tone, if we were Real Salt Lake, both goals would have counted. Rules be damned. Italics added for conspiratorial effect. Because I am whispering the words as I type them.

Cuz look at how offside Omar Cummings is when the second goal is called off. Now back to Edu. Who is... also offside. ET TU, EDU? WHY ALWAYS YOU? 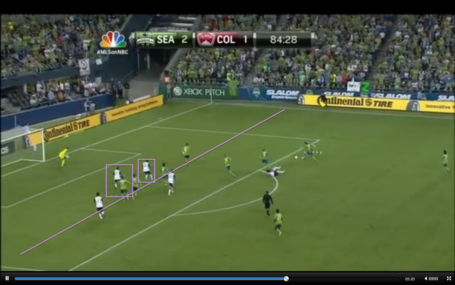 Again. Martin is highlighted in grey, you know why. Oh you KNOW why, Adam Johansson. I'm looking at you. You beast.

First, this is not offside, and I'll explain why.

Jeff Larentowicz is not passing the ball, and Stott should have been able to see that. Look at Jeff, though he is obscured by the defender, his leg is at full extension and he's coming down with the top of his foot. Top of his foot. Any pasty faced applejohn could tell you that "top of the foot" means "I am shooting the ball". That's exactly what he is doing. He is taking a shot. The shot was already on a trajectory for the goal. The fact that it took a deflection off Omar Cummings (who tried to get out of the way of the shot, he had nothing to do with it) makes "offside" irrelevant. It's not a pass. It's a shot, and Omar Cummings is not gaining any advantage by being there. He did not touch the ball. The ball touched him. There's a difference.

If Kevin Stott going to tell the rules to get bent then he could at least give the Rapids a point while he's at it. Declare up is down and that now games will be determined by the quality of passing rather than based on the rather arbitrarily chosen method of seeing how many balls hit the back of the opponent's net. Really. Play jazz, Kevin Stott, you look like you're into that kind of thing.