Breaking down the goal: Smith on the Ball, Castrillon off the Ball = Magic

Share All sharing options for: Breaking down the goal: Smith on the Ball, Castrillon off the Ball = Magic

That first goal against Swansea was pretty magical, wasn't it? Everyone was doing what they like to do. A few basic things to note about that goal, one major, several minor: The MAJOR thing to note is how high up Jeff Larentowicz was playing in the game, and when Shane O'Neill took his place, he played high up as well.

This should be a message to the coaching staff that Larentowicz and O'Neill's position of back pivot is most productive when pressing the game high up. Larentowicz's distribution was key on this play, and it would not have happened if he was playing far back in front of the defense.

This, of course, requires that the opposing team's press isn't as threatening as it is in league play. In the first half of the game, Swansea did not press the game high up as other teams have done with Colorado with massive success. Swansea was content to be patient, weather the storm, and give their players time to adjust to being in a game. Hence why their second half was better than their first: they pressed the Rapids and the Rapids--predictably, I might add--didn't take the pressure well. Not as poorly as we have in league play, but not well. Defending is still a problem, even though I'd say the young Davy Armstrong gave a good account of himself on the night.

Let's break down a play where all the pieces fit together. This is how Rapids goals could and should be happening, and aren't. I also want to break down where the Rapids tried a similar thing and it didn't work at RSL for another post. Just as a note: what I'm going to tell you has nothing to do with personell and everything to do with pressing the game.

Jamie Castrillon and Jamie Smith couldn't be more opposite. Smith is clever on the ball, Castrillon clever off the ball. When they get together and it works, magic like this happens.

Let's start at the beginning of the sequence: Castrillon gets the ball and puts it to Larentowicz. You'll note all the options Castrillon has here. That's Akpan's leg running away towards goal and he's got Kamani Hill calling for the ball out on the wing. He chose Larentowicz in the middle, and it turned out to be the right choice, as Larentowicz had a good idea. 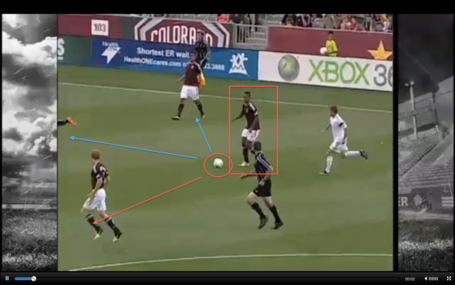 Larentowicz's keen eye picks out Smith with a perfect pass to cut the defense. This is great stuff, and again possible only because he is up so far on the pitch and not trying to cover the back 4. This is because Swansea isn't pressing the game at this point. Pressuring the game at midfield, maybe doing a bit of clogging in the midfield, would have forced Larentowicz back so he couldn't make this pass. But this was the moment, right here, where we can start smelling that goal coming. This cuts the defense right in half and isolates one of them against Jamie Smith, who uses his Scotch Magic. 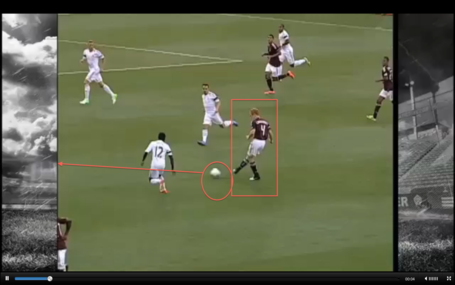 Jamie Smith's on the ball dribbling is impeccable here. This is vintage Jamie Smith. We're going to need to get a little closer to see what he does here, but look at the options he has. He's in an amazing position with a huge amount of space he could run into. He can make a run on goal for a 1v1, he could take a shot, he's got a ton of options. But the one option he picks is the one we don't even see coming (because of the camera angle). 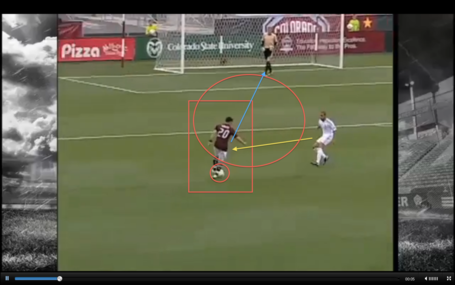 Instead, what Jamie does is he hold the ball up and starts to dribble. His defender gets pulled in closer to him. This

is vintage Smith: very clever on the ball. We need to get closer to see what's up, and thankfully someone got a shot

of it. His body language and his positioning has the defender guessing what he's going to do. His eyes are right on

the ball, and Smith has got him believing that, if anything, he's going to pass it towards the box where Castrillon and

Akpan are waiting for it, so he's not going to respond quickly to the onrushing Zapata. Not quickly enough. 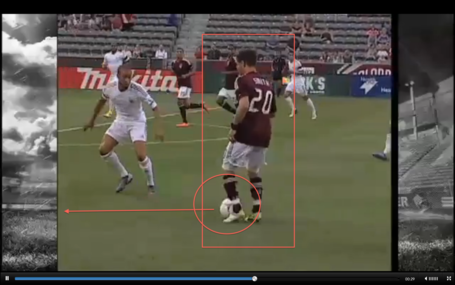 Now Zapata has a ton of space, and the distance the defender has to close is much greater. Unless he's superhuman fast he is not going to get to that ball by the time Zapata has made his cross at the edge of the box. Those precious few fractions of a second which Smith bought for Zapata are the difference here. The guy doesn't even get close as Zapata is able to calmly put the cross in. 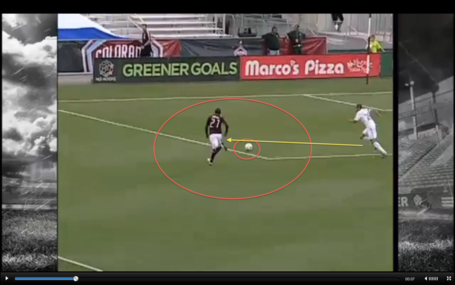 Jaime Castrillon, while you weren't paying attention, has taken his position as a kind of "false 9" to plant the keeper, drawing defenders to him while Andre Akpan rises up and knocks in a perfect headed ball into the back of the net. Look at how much room Akpan has in this goal. Defender is much closer to Castrillon than Akpan. 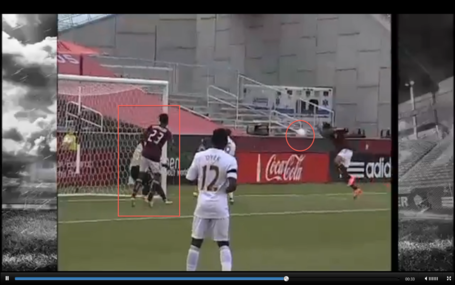 Now, you're thinking "WTF, why can't Rapids play like this all the time?" The fact is, most of the time the Rapids offense is missing a crucial piece. Remember that picture of Larentowicz's cutting pass? That doesn't happen in our league games, because Larentowicz is preoccupied with a high pressing team, and trying to cover for a shaky back four who are trying to re-learn how to defend. I hate to put it all on the defense like that, but think about it.

If the Rapids had a confident defense that didn't make mistakes under pressure, then we could have our pivot play higher up on the pitch. This shows what the Rapids have to work with (even in their second string) and there's no doubting that this team has talent to get the job done, and that the coach is playing the guys in a style of football that is entertaining to watch.

But the problem is coming when the rubber hits the road, and I think most of that problem is in the defense, which is affecting the rest of the parts of the team. As evidenced from here, if the Rapids never had to defend, we'd be undefeated, obviously.

What I took from goals like this, and the orchestration of it, was great work from guys like Larentowicz, Smith, and Castrillon. Combining on the ball acumen, clever passing, and deceptive off the ball movement (and not more than a little bit a of a fantastic finishing touch from Akpan) the Rapids offense can make magic happen.

But all those pieces need to be there, and in league play, we've rarely seen it all come together like that. Though moments like will certainly give Rapids fans some much needed hope for the rest of this season.