Share All sharing options for: Jaime Castrillon: The Invisible Man

This is the fun part, where I get to write after a Colorado Rapids dominant victory over the Portland Timbers. I had high praise for Jaime Castrillon and Jamie Smith, which did all sorts of things for my spelling. But where some fans are content to rave about the returning Scotsman's great performance (and it was pretty special), I wanted to talk about Jaime Castrillon.

I got this idea from reading Stumptown Footy, and they are better at this than me, so go read them.

This isn't meant to make Jamie Smith's return any less awesome than it was. I am a huge fan of Jamie Smith. I think he's one of the most under-rated players in the league, and possibly the best get of the Smith Era next to Jeff Larentowicz and Marvell Wynne.

But Castrillon has been something of a mystery to Colorado fans. As UZ has put it: he seems to go invisible. Not being involved in plays for long stretches of the game. In fact, his touches on the ball (measured in "events" by Opta), are in the low range for a box-to-box midfielder. He's not on the ball altogether that much comparatively with his fellow midfielders Martin Rivero and Jeff Larentowicz.

I've also heard some grumbling recently that "numbers don't mean anything on the football pitch" and some other nonsense like that. You know, the sort of thing people say when they are wrong. (Ed note: lololol)

But if a picture is worth a thousand words, imagine what a lot of pictures is worth.

Meet me after the jump to unravel the mystery of Jaime Castrillon, why he constantly tops the OPTA Castrol-lion index for the Rapids, and why everyone in MLS needs to be watching this guy. You know you want to.

First, let's talk expectations: we expect that a midfielder playing in an American league is going to run all day and basically out-endure his opponent. Best example of a prototypical American midfielder? Wells Thompson. Landon Donovan is another one. These guys get a lot of praise for the "hustle" and their "work rate" while guys like Castrillon get called "lazy" or "invisible".

That's not Castrillon though. And another thing that makes him hard for us to process is that he's not exactly a Kyle Beckerman or a Pablo Mastroeni, in that he doesn't demand the ball a whole lot. Beckerman and Mastroeni are the kinds of guys who are always calling for the ball--the midfield cogs. Again, OPTA stats measure mostly moments where you were involved in some way with the ball. Castrillon spends a lot of time without it. So what's the deal? Why does he even get playing time?

Why you no listen to me?

Let's watch what I call "Attempt 1" in the Colorado/Portland game. Let's play "Where is Jaime?"

Castrillon is highlighted in a box here. The Ball is passed to Freeman on the wing. 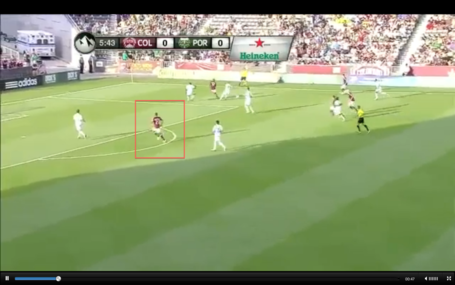 OK there he is... way far away from the ball. But look at how far forward he is. And how far his defender would have to track back to cover him. Plenty of space to run into. Wait, what? Top of the box? What the fuck is a midfielder doing way up there? 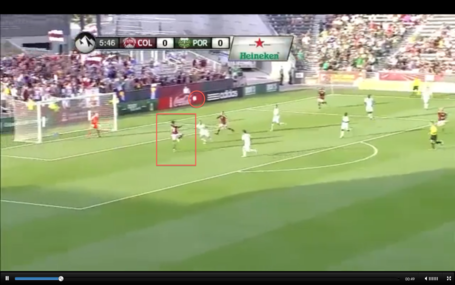 Oh right, trying to score a goal... All that space to run into allowed him to ghost his defender and this is now a one on one situation with the keeper. If he kept the shot on frame (50/50 shot) this would have been a goal. And he only touched the ball once. The rest of the time he was pretty far away from the action. Take a look at the next play to see him a little more involved. 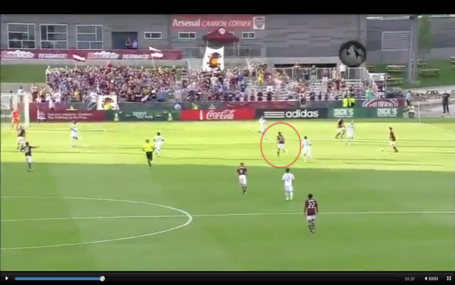 Mullan is at a dead stop about to attempt his first cross to Casey (which later resulted in a goal, but we'll get to the successful one later because Castrillon had a hand in that. But where is Jaime? Jaime is equidistant from three different defenders, none of which, save for the one trailing him by a yard or so, seem to be all that interested in him. Except the defender on Mullan seems to be pointing at something... i wonder what he could be communicating to his other defenders?

If I had to guess, he's guessing Jaime is trying to provide Mullan an outlet. Mullan however had other plans... 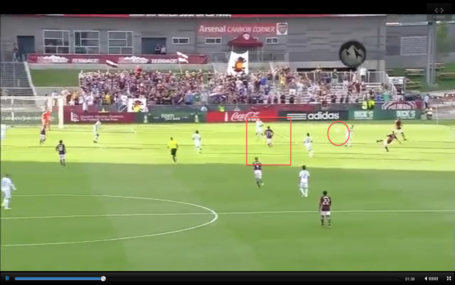 Sucker. The defender is now focused on Castrillon. Mullan sees Castrillon has pulled a defender at the edge of the box closer to himself and this opens the space for the cross. to Casey, which Casey almost got on frame.

Again, Castrillon did not even touch the ball here. According to the OPTA Chalkboard, he's a ghost.

One thing OPTA won't forget is Castrillon's goal. A rather opportunistic calf-shot. It all started out on the wing. You are now about to witness some of the worst defensive positioning in all of MLS. Be warned, this is going to hurt your eyeballs if you even play defense at an amateur level.

Look at this nightmare sandwich. 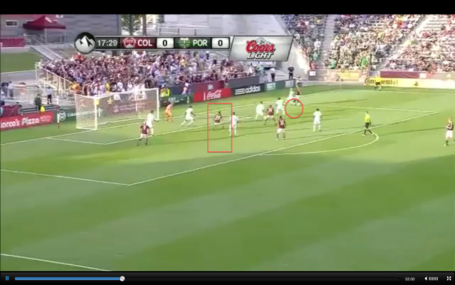 That's Conor Casey at the far post, Omar Cummings at the near post, Castrillon in the middle, and Martin Rivero at the fucking top of the box.

It's like a thin paste of earwigs smashed between two slices of being naked in high school math class with a little bit of bath salt as a garnish. In short: this situation isn't about if there is going to be a goal, but from whom the goal will come. And the Timbers defense is handling this one terribly. But what can they do? They decide to focus on Omar Cummings. Casey has loads of room, but look at Castrillon. Equidistant from every defender. He's got about a yard in each direction to move. 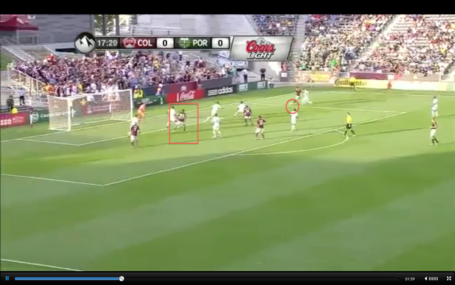 Here's where it gets fun: looks like the guy who was closest to Castrillon before is just standing still. Perhaps to cut off Rivero, or perhaps because he thinks Cummings is going to be where the action is. That's certainly what everyone else thinks. Omar Cummings pulls two defenders onto himself and Casey somehow gets his defender to think that the cross is for him. AT THE FAR POST. THROUGH TRAFFIC. Are you kidding me? Is he even looking at the ball? Castrillon, on the other hand. Doesn't really move, just opens himself up to receive the cross at his feet. Thus, no one is paying attention to him save for one guy in front of him... now I like those odds, don't you Jaime?

And here was the only time Jaime Castrillon touched the ball on his best play of the game. 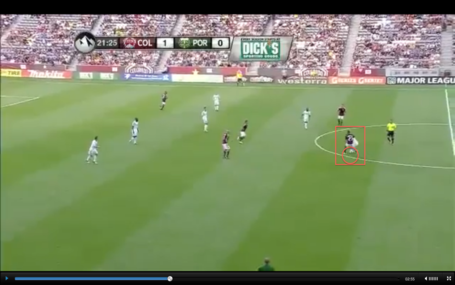 There's Jaime mugging some poor schlub at midfield. This pops the ball up for Rivero, who has an exchange with Hunter Freeman on the wing who then puts it out to Brian Mullan. 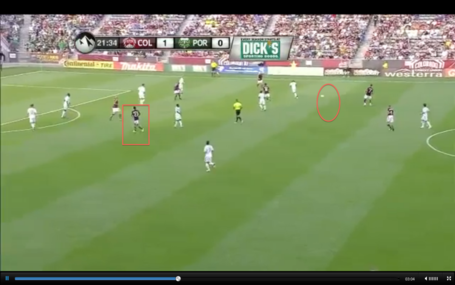 Notice Jaime is getting further away from the action at this point as Casey begins to make some moves on the box. 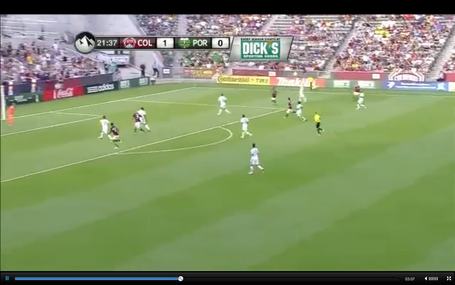 And now (sorry for not marking this one) Castrillon is making a run at the far post while Casey is going for his bread and butter: taking on two center backs at once. He tried it before and was unsuccessful because Perkins was there to cut him off. But this time? He's got the invisible presence of Castrillon.

Both defenders are on Casey as the ball (the little white smudge, SORRY) floats into the box from Mullan's cross. Watch what the difference is here with Perkins. The defenders both go with Casey, but what's Troy Perkins doing? 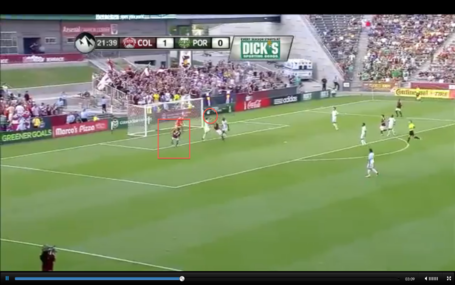 Castrillon may be invisible to us, but he's not invisible to Troy Perkins. Perkins has positioned himself in the middle of the net (Casey's goal went off to the right) because he's aware that his defenders are all on Casey, but Castrillon could be the real threat. He certainly has fooled them before. But in this, Perkins is suckered again. Castrillon has planted him. He's not no chance of getting to Casey's shot, provided it is on frame and going to the right--which is where Casey wants to put the shot (knowing full well that Perkins has planted himself to deal with the threat from Castrillon).

So, I urge you, MLS (and especially you defenders out there) continue to ignore Jaime Castrillon.

I know our leading goal scorer would like that very much.

PostScript: I love (read: loathe) how people say that they know why Castrillon was brought in or what he "should be doing". If it results in goals and good performances from the club, then yeah he's doing what he should be.