A few days ago, the Rapids released a piece on the formations of the team (put together by our friends at OPTA) along with a picture of the average position on the field of every player on the team. I highly recommend reading the piece, as it has quite a few interesting tidbits about the team's shape and passing throughout the season. Let's take a look at that picture: 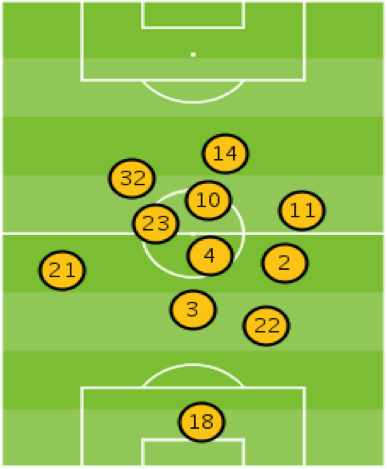 As you can see, it's a bit jumbled up and resembles a couple of different formations at once. Namely, it looks like a bit of a jumble between a 4-3-3, a 4-4-2 with a diamond midfield and a 4-2-3-1, the three formations that Oscar Pareja swapped between throughout the season. (Let's also ignore the fact that Omar Cummings is being used as a center forward in that picture, because I think we'd all be better off forgetting about that.)

I think we can assume without much resistance that Pareja is going to try and get back to the 4-3-3 full-time next season. The only reason the changes happened so frequently this year were because of the occasional injury and because everything that the team tried seemed to fail very quickly. Let's compare that picture to what Pareja's 4-3-3 formation is supposed to look like. 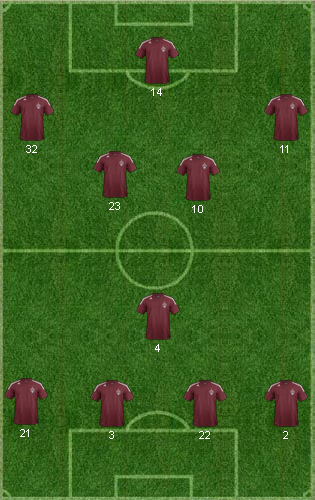 There's no question what the biggest problem on the team is. Look at the defense on the 'ideal' formation and the defense on the actual positioning chart, and you see quite a bit of discombobulation. Luis Zapata is drifting out in the middle of nowhere. Hunter Freeman is almost in the midfield and too far into the center of the field. To be fair, the 4-3-3 had the two of them playing more as wing backs than full backs, but there's no excuse for that amount of separation between the back line.

The only two players that worked together well in the back seemed to be Drew Moor and Marvell Wynne, a duo who have always at least had the chemistry to work well together. Unfortunately, Wynne was out for quite a while this season and I have to assume that if you put Tyrone Marshall in there instead, there would be even more discombobulation present in that back-line positioning.

Is it any wonder that the team gave up 50 goals last year, a great many of them coming from counter-attacks down the wing? Had there been guys like Anthony Wallace or other solid defenders playing in the left and right back spots, I'm willing to bet that those numbers would have been different. One notable thing about the 4-3-3 formation we were running is that it leaves a rather sizable gap in that area.

If there's one thing that Oscar Pareja needs to get right next year, its that. Against teams that don't have particularly pristine offenses, Hunter Freeman could be a fine choice to add his bite to the attack. However, against a team like the San Jose Earthquakes or LA Galaxy, they can't afford to have two wing backs playing too high and out of position on the field if they want to keep this formation rolling.

Both Zapata and Freeman are gone now, of course.

On the attacking side of the ball, you can see that everything went mostly to plan. Omar Cummings in the central forward position is, of course, not a good idea. However, if they can get Humberto Suazo a really good target man or poacher into that spot -- either a younger Conor Casey or a Chris Wondolowski type would be the ideal, but it doesn't necessarily need to be that guy -- it will improve immediately. Edson Buddle is a start, but his advanced age and bad form since returning to MLS don't bode well for another 15 goal year.

It's hard to parse why the offense failed so miserably at times with any explanation that doesn't involve the fact that the players on this team just couldn't finish the absolute mess of chances that were created. To quote the OPTA article:

The Rapids weren't bad in terms of chance creation, finishing in the middle of the pack in most categories and trending toward the top half in many. There is one clear red flag, though: a propensity to miss the target.

Only Sporting Kansas City (261) racked up more shots that failed to threaten the goalkeeper than Colorado (223). If Pareja can bring in a few players who'll pepper the frame, the goal total should rise (and Rivero might have more to show for his efforts).

If Brian Mullan is going to stay on the right wing, it is going to come down to four different players to put the ball in the net -- the center forward, the left outside forward, and the two guys sitting in the center of the midfield behind the center forward. If they don't draft someone like Jose Gomez and Jaime Castrillon stays in the left central position there, he should be fine. Tony Cascio should improve in his second year, as he was absolutely bursting with potential this season. The left wing spot will likely belong to him next year unless they can find a better guy.

As an aside, the formation up there shows pretty well where Jaime Castrillon is supposed to be, and why he isn't a true 'left midfielder' even though that is essentially the position he is playing. Usually, you think of a left midfielder as someone around the center of the park and well out wide, but Castrillon is simply not good at that. When playing in the Diamond 4-4-2, he was often the weak link as his passes needed to be longer and his defensive mettle was tested far more. In the 4-3-3, he is far more useful than in the 4-4-2, and if Oscar Pareja uses that 4-4-2 again with Castrillon involved, it will be a mistake.

The key, as they say in the article, will probably lie with Rivero's ability to finish his chances. We've spoken before about his miserable 3.3% shot conversion percentage. He will either need to be told not to try for the shot as often -- his passing was perfectly acceptable all season long, and his assists will keep coming as long as that continues -- or learn to aim his shots better. The majority of his chances came from outside of the area this season, and both of his goals came from inside of it.

So can the 4-3-3 succeed in 2013? Most likely. It's going to take a superb center forward (still not counting Buddle, sorry) to help finish the chances and some new full backs who can keep the ball away from Matt Pickens on the counter-attack, which this formation is unfortunately vulnerable to. The ideas are all in place, it's the execution that needs work. I think that we all saw that coming prior to 2012, though perhaps not in the disastrous fashion that it did.