Questions For The Rapids: Don't Break The Line

Analyzing a "defensive breakdown" on the fourth and final goal against the Colorado Rapids by the San Jose Earthquakes: how it happened, what rules were at play, and how to improve.

Share All sharing options for: Questions For The Rapids: Don't Break The Line

You hear this a lot from defenders: "stepping up" or "stepping together". But what does that mean exactly? I remember when I first heard it, I thought it just meant someone is "stepping up" their game, as in "getting more intense" but as a defender, "stepping up" has a very specific meaning. It means that you maintain the "line". This is critical to understanding why the Rapids did so poorly against the Earthquakes, and important to understanding how the Rapids need to improve over the next season.

To be sure, there's a lot more going on with the defense at the San Jose game, you don't give away 4 goals from only 6 shots on goal (that's 10:6:4 total shots: shots on goal: goals ratio if you're keeping track) unless you've got major problems in the back. What this tells me is that the Rapids did a good job of limiting opportunities through the middle of the park, possessing the ball well (the rest of the stats bear that out) but did an awful job in their final third of the pitch. The Earthquakes didn't nearly have the run of the pitch that they had in their last outing against the Rapids at Buck Shaw Stadium. Though the scoreline was the same, they were two very different games.

Two of the goals were caused, ostensibly, by failed clearances from Marvell Wynne. That was the immediate cause, but there are a lot of other causes that go into it as well. For example, why was there so much space in front of Wynne when there was so much action in the box? Mistakes happen, that's football, but this just looked like systematic disorganization and lack of defensive vision.

One of those fundamentals which I would like to talk about today is the "line" that I mentioned before. I don't want to go too much into Soccer 101 but here's a paraphrase of the offside rule: the line of play is determined by the position of the last defender. You cannot initiate an offensive play to a player who is beyond that line of play. Think of it like an invisible "out of bounds" line that travels in line with the last defender. If an offensive player is standing over there, past the last defender, it's like he's standing out of bounds. You can't play the ball to him any more than you can play the ball to a guy standing on the sidelines.

Here's where the rule gets fun: defenses might need all four guys, or five guys, or even all 10 field players back to defend. That's when leadership is absolutely crucial: the leader of the defense (the goalkeeper usually in the case of set pieces, or the captain, or the most senior defender...) has to communicate where the "line" is, and make sure that everyone is in that line so that they can keep offside players offside, lest they somehow end up in a very advantageous position to score on accident. Do this well, and you've got yourself what we call a decent "offside trap". But it comes with risks: There's really nothing worse than having a player whom you thought was offside actually be kept onside by a defender who couldn't get back into line in time.

This year, I've yet to see the Rapids play the offside trap effectively. In fact, more often than not, the defense is outwitted by forwards that are much more clever and able to confuse the defense.

Luis Zapata is going to be the guy to watch on this play. 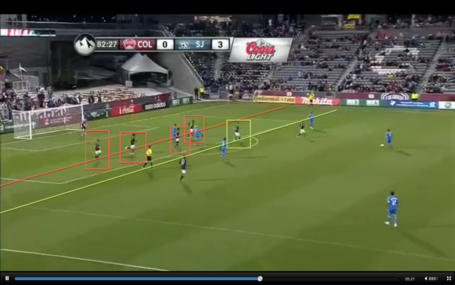 First, let's look at the situation. Wondo deflects the ball out to Sam Cronin (4) who has a choice as to how he's going to play ball in. When the ball came to him, he's got every forward available to him. Both Lenhart and Wondolowski are kept onside by four different defenders. Drew Moor is "stepping up" and trying to form a line, and you can see most everyone is looking at him to get their positioning. Drew is highlighted in green (as he is the defender who was setting the correct line) but the other four are in red because they aren't setting the right line and thus keeping Chris Wondolowski and Steven Lenhart onside. But as soon as most of them see Moor stepping up, they move up to meet him. Meet me at the next picture. 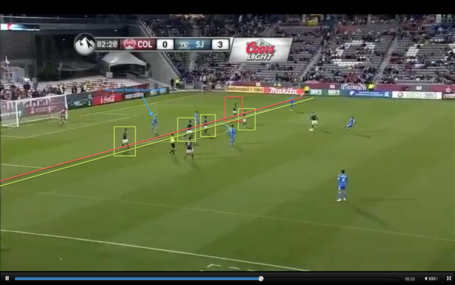 But not Zapata. See from this picture here, the other three players are now in green, trying to pick up what Moor is laying down and forming the line up. But not Luis Zapata. This is split seconds here, but Zapata realized too late what the Rapids captain was trying to do, or perhaps Moor wasn't communicating it effectively to the Left Back, but Zapata is highlighted in red, and the actual offside line is with him. So Wondo is kept onside, and we all know what happened after that.

Let's see it from a different angle. 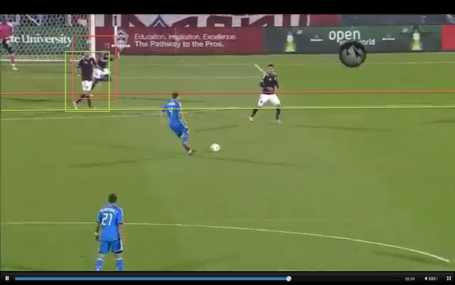 Zapata is behind Moor and clearly in step with Wondo and not in step with Moor. If he were lightening fast, of course, he may have gotten there before Cronin made the pass, but the real fault is with mental quickness. 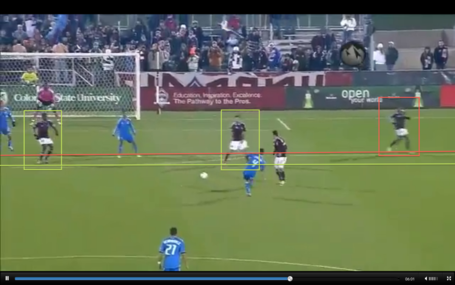 See there. The line is just slightly behind Moor. On the broadcast, Chello faulted the two center backs for not being more aware of Wondolowski's position. I respectfully disagree, though I can see his point. Drew Moor was playing a different game and trying to be clever by holding the line a bit higher so that both Wondo and Lenhart would be kept offside. Lenhart stayed offside, but Wondo did not. He was kept onside by Zapata.

And we've seen this fairly often, especially against teams like the Earthquakes who thrive on clever forward play. The back four simply haven't had the kind of communication and fluency with one another to hold a solid line, and we've seen the consequences of that.

Zapata of course realizes this, on Twitter, he and Hendry Thomas were talking about this.

Of course, they could also have been talking about Luis being bad at FIFA, who knows.

View conversation
(For those of you who don't speak Spanish, Zapata is basically saying that it's very good to have teammates who motivate him and recognize his issues and are helping him get better at these kinds of errors. The whole team gets that stepping up is an important fundamental that just isn't going right)

Burgundy Wave had a chance to get a question in to Oscar Pareja after Tuesday's practice, here was what he had to say in reference to the issues with "stepping up" with the defensive line.

PAREJA: I think it's just daily things we have to reinforce all the time. That part I think it was maybe Luis kept him on. Our concepts are always the same with them (the defenders). One of the weaknesses that we have been experiencing in the last few games is when the ball is played in front of us, how we step up together so we can have actually a line defending. And this was not the case in this part. This was one of those plays where the concentration was lacking, and one step that you don't do quick enough, and you keep people on. And that was disappointing at that particular place.
Now the plan with the defenders is always just to remark the concepts that we have, the repetitions we do durring the week, and see if the personell we have is the one that we want and if not, to be quite honest, someone else has to do the job.

Pretty harsh words, but it's fair to say that we shouldn't be having to go back to "Soccer 101: How to Use the Offside Rule for Fun and Profit" at this late point in the season. MLS is a fast paced league, and the mental quickness required by defenders needs to be better. The communication needs to be better. And the results will not get better until these fundamentals are grasped. Until then, expect more goals.

Earthquakes vs. Rapids - Colorado Freezes Up In 4-1 Loss