It was 15 years ago today, Sgt. Logan told the league to play...

Share All sharing options for: It was 15 years ago today, Sgt. Logan told the league to play... 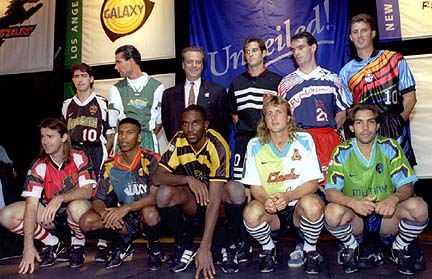 It's a big day for Major League Soccer as today we celebrate the 15th anniversary of league play. I've been watching MLS as at the very least a casual observer since the early days, and I remember the old times fondly of games at Mile High Stadium and Invesco Field. Original MLS commissioner Dave Logan may have been terrible - he lost the league about 250 million dollars and couldn't keep attendance up to save his life - but the league has survived through quite a bit in order to hit the 15 year milestone with such great quality of play these days and such great fanbases building up across America.

Obviously as a Rapids fan the years haven't been as kind to us as they have to teams like the Chicago Fire or DC United, but the first cup win after three cup finals certainly has us feeling good now. What are your favorite memories of the last 15 years, Rapids fans?