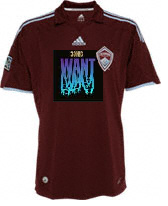 Possible mock for the future jersey?

In a very unique and strange proposal, Colorado Rapids front office member Jeff Plush has announced that in their hunt for a jersey sponsor, a new candidate that nobody saw coming has arisen. With speculation about companies like Coors and Chipotle being possible sponsors for Colorado, local band 3oh!3 has reportedly decided to throw their hat into the ring. The offer that we heard was $3 million dollars for the next three years to put their current three album covers onto the Rapids kits.

"It's an exciting proposal," said 3oh!3 frontman and noted football enthusiast Sean Foreman. "We've never seen a soccer team wear a musical artists work before and the chance to be groundbreakers in the field is exciting to us. Who knows, you might see Paul McCartney's next album on an Everton shirt in a few years if this thing takes off!"

After a less than favorable reaction from journalists at the press conference, Plush exclaimed "Well, at least it's not BIMBO."