The Colorado Rapids in 2010 - The Story the Numbers Tell

Share All sharing options for: The Colorado Rapids in 2010 - The Story the Numbers Tell

If you've been a fan of the Colorado Rapids for at least the 2010 season, you've probably heard a lot of hating. In other news: water is wet, Lionel Messi scores goals, and Carlo Ancelotti reminds everyone of an amiable uncle though we can't exactly say which one.

There's lots of stories out there about how the Colorado Rapids, and the "Class of 2010" Colorado Rapids in particular, were a "thuggish club". Ives Gallarcep, of America's most popular soccer blog: Soccer by Ives, has often said to our own Marcelo Balboa on "From the Pitch" that he doesn't think Colorado plays particularly good or 'beautiful' football. Paul Gardner, the intractable and author of Soccer America's most Anglophobic soccer blog "Soccertalk with Paul Gardner", has never missed an opportunity to take some rather nasty shots at Colorado and the style of soccer played there..

There's also the odd Real Salt Lake or FC Dallas fan who will make some comment on Twitter about how the Rapids are thugs and "don't deserve the title". Or about how they really suck and they "just got lucky at the right moment."

First, Colorado got lucky at several right moments, but that's hardly the point.

Second, I'm not sure how this "Colorado Rapids are thugs" meme got started, but the numbers (that is, the statistics at the end of the season) don't play out the meme. Unfortunately, as with much of so-called "soccer wisdom", this meme goes right out the window upon even the most basic analysis of statistics provided by Major League Soccer's own website.

What, you don't believe me?

Join me after the jump, oh reader. I have such wonderful things... to show you.

Let’s be clear: people have their own tastes of what they think beautiful soccer is. And there isn’t any objectivity here. Any team can play good or beautiful soccer, regardless of what sort of tactics they use. It just depends on how they’re playing and, more importantly, who is watching them play.

Ideals are good to have. And it’s good to have ideals when it comes to watching the beautiful game. But we have to understand how that attitude (or at least, the claim to that attitude) can be used and abused to great effect.

You know who you are: the fan that constantly references "beautiful soccer" as if it’s some objective criteria by which all teams are to be judged. You are that guy who sits back and judges a team while admitting to never even really having seen them, but saying that the reason you haven’t seen them is because you don’t think they play "beautiful soccer" even though you would have to see them in order to know that.

When some in the soccer blogging community say: "Well, I don’t like Colorado because they don’t play beautiful soccer". That's a non-answer that seems very much like an answer. Most people will accept it, though, without getting further into it. Even though, as I stated before, 'beautiful soccer' really isn't as objective a category as people are led to believe. But this makes blogging a lot easier, especially when you don’t have to look at pesky things like records, numbers, statistics.

Why go through all that trouble when you can just say the phrase "beautiful soccer" and have people lining up to drink your gak?

This is where the "Colorado are Thugs" meme comes from, ultimately. It's a judgment made, mostly in bitterness, and in total absence of any kind of statistics. As if they don't exist. Ladies and Gentlemen, they DO exist. And I'm going to go through them. 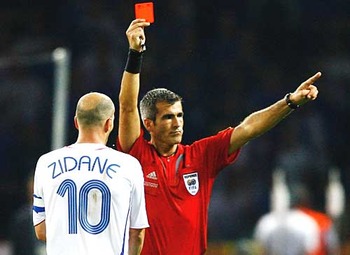 As often is the case, the numbers tell a different story than the "Colorado are Thugs" meme.

If you were a team of thugs, one would assume that you get called as such because of the number of fouls you commit, and the frequently severe nature of those fouls. The relevant statistic you want to look at here is: Fouls Committed. You're also going to want to look at the number of Yellow and Red Cards issued.

All of this information is available on the MLS website. You have had absolutely no excuse for not looking into it.

These are just simple numbers on the season. This should more-or-less vindicate Colorado of being thugs. 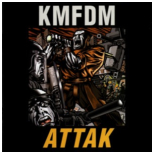 Next, speaking of beautiful soccer, many people say it has to do with the 'attacking nature' of the soccer. That the team is often in attack, and not just sitting back and defending. That tends to make for more attractive and entertaining soccer. Was the Dallas and Colorado game pretty? Of course not. But was it entertaining? You bet.

The reason that Dallas versus Colorado was such an interesting mash up: the different tactics. Dallas favored a more indirect, Latin-influenced style of passing and attacking, whereas Colorado took a more hybrid English-Italian flavored approach of direct style of disrupt-turnover-attack. There have been good analyses done of Colorado's approach to soccer. Though it should go without saying: Colorado's tactics in 2010 were refined without question--at least on paper.

But aside from the final, people are saying that the 2010 Rapids were a primarily defensive team. The numbers tell a decidedly different story.

The Rapids were in the top 6 in the league for Shots overall (that includes attempts that were just way off), and then tied for 4th in the league for Shots on Goal (good chances). You don't get to that point by being a primarily defensive team. If the Rapids were as defensive minded as some have claimed, then the numbers would show the Rapids toward the middle or bottom of the league in terms of shots, and certainly toward the bottom in terms of shots on goal.

For example, if you look at Toronto FC, a Preki-influenced defensive outfit in 2010, predictably they end up at the bottom of the league for both Shots and Shots on Goal. Colorado 2010 was not Toronto FC 2010.

In sum: the Rapids played regularly attacking soccer: producing a predictably high shot and shots on goal stats. Their "offensive efficiency rating", which I just made up by dividing the shots on goal into the number of shots overall is about .4 which means that about 40% of their shots were good chances. Compare that to .38 for Dallas and .43 for league leaders in terms of both shots and shots on goal: Sporting Kansas City.

I know, right? Didn't expect Kansas City to get up there like that. If you check the stats, Kansas City was the most offensively geared team over the season. Check it out.

So all these numbers should now vindicate Colorado from being some kind of boring defensive team. We don't ever want to underestimate the value of a good defense (which Colorado had in spades) but if attacking soccer is the name of the game--Colorado played it just as well as anyone else.

Those who feel justified in criticize the Colorado Rapids Class of 2010 could be justified on other grounds, but the two main arguments against the current Champions are not supported by any of the numbers on the season. Done deal.

And in the end, the only real argument that any soccer fan should need is this: 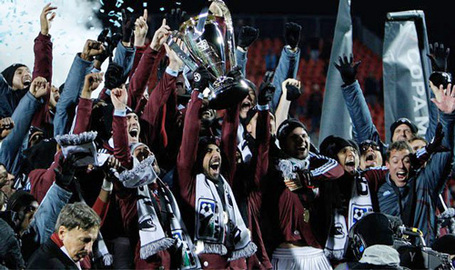